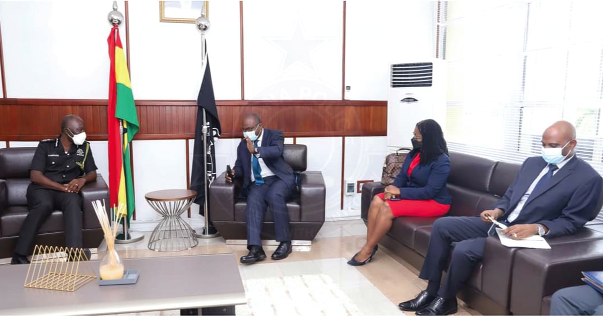 IGP Dr Dampare (left) in the meeting with Dr Ernest Addison (2nd from left), the Governor of BoG, and other senior officials of BoG

The Police Administration has given hints of plans to review strategies for the safety of movement of cash across the country.

The new plan, details of which are yet to be made public, was made known when the Inspector General of Police (IGP), Dr George Akuffo Dampare, held a meeting with officials of the Bank of Ghana (BoG) and the Association of Bankers to discuss security issues in the banking sector.

The meeting was held as a result of recent attacks on some cash-in-transit operations, mainly by bullion vans.

Information made available by the Public Affairs Directorate of the Ghana Police Service indicated that the meeting was held to build stronger partnership between the police and bank regulators.

Among other things, the meeting highlighted new strategies being mapped out by the police service to counter cash-in-transit robbery attacks and the challenges that are encountered.

At the end of the meeting, the police administration assured players within the banking sector and the public of its commitment to ensure a safe and secure atmosphere for banking activities and guarantee the safety of all persons.

The administration also assured police officers who provide escort duties for such bullion vans that their safety was paramount so they would be provided with the needed protection to enable them to serve society in peace.

In January 2021, some robbers attacked a bullion van at Fomena in the Ashanti Region and took away GH¢500,000.

The suspected robbers killed a policeman during the attack after which the police arrested five suspects in relation to the incident.

In March 2021, another incident occurred on the Spintex Road in Accra where the robbers assaulted the driver of the bullion van and stole money on the vehicle.

In May 2020, four suspected robbers attacked another bullion van at Techiman and took GH¢600,000.

On June 14, 2021 some suspected robbers on a motorbike opened fire on a bullion van in broad daylight at Adedenkpo, James Town, killing a police officer on escort duties on the bullion van and making away with an unspecified amount of money.

A female bystander who was in her shop was also killed by a stray bullet, while the driver of the bullion van sustained injuries.

The then IGP, Mr James Oppong Boanuh, threatened to withdraw police escorts on bullion vans if the banks failed to secure armoured bullion vans by the end of June 2021.

The banks later requested more time to enable them to acquire the fortified vans for cash-in-transit operations.

One killed in bullion van attack