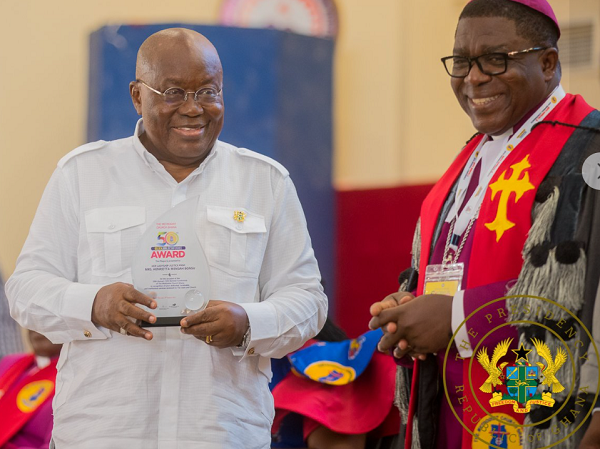 President Akufo-Addo displaying a plaque presented to him by the Most Rev. Dr Paul Kwabena Boafo (right), Presiding Bishop of the Methodist Church of Ghana
30.5k Shares

The economic challenges facing the country are not a hopeless situation, President Nana Addo Dankwa Akufo-Addo has asserted.

He said the government was working assiduously to return the economy back to the high rates of growth that characterised the three years preceding the COVID-19 outbreak in 2020 and thus bring relief to the people.

“I urge all of you gathered here to have that same belief that the fortunes of Ghana under the Presidency of Nana Addo Dankwa Akufo-Addo will be restored. The Battle is the Lord’s,” he declared.

The President made the declaration in an address at the opening of the 12th Biennial and 50th Golden Conference of the Methodist Church of Ghana in Winneba yesterday.

About 2,000 delegates are attending the conference.

He further gave an assurance that the government was determined to continue to roll out appropriate policies and programmes.

The President said he was confident that these policies and programmes, coupled with hard work on the part of Ghanaians, would make the country come out of the current economic challenges.

“Above all, I continue to have an abiding faith in God to help turn the fortunes of our nation around, accompanied by appropriate policies, determination and hard work on our part.

President Akufo-Addo indicated that his objective, since assuming office in 2017, had been to help improve the living standards of Ghanaians.

“Every policy initiative, whether it is the free senior high school policy, Planting for Food and Jobs or the One-District, One-Factory initiative, has been implemented with the well-being of the Ghanaian at heart,” he said.

He noted that before the onset of the COVID-19 pandemic, the country had one of the fastest growing economies, not just in Africa but across the world.

Unfortunately, he said, the ravages of the pandemic, worsened by the effects of Russia’s invasion of Ukraine, had led to spiralling freight charges, rising fuel costs, high food prices, steep inflationary spikes and widespread business failures.

“I am fully aware that these are very difficult times for us in Ghana, just as they are for most people in the world, cold comfort as that may be,” he said.

The President said one of the ways to bring the economy back on track was the approach to the International Monetary Fund (IMF), which he described as an important step.

“Other steps will be taken, in particular to deal with the unacceptable depreciation of the cedi. Reining in inflation, by bringing down food prices, is a major preoccupation of the government, and this season’s emerging, successful harvest will assist us achieve this objective, together with other policies that are being put in place,” he added.

Furthermore, he gave an assurance that the government would continue with the programmes for the expansion and modernisation of the educational system to create a 21st century workforce.

Others initiatives he mentioned were the systematic reform of the healthcare system to ensure a resilient, robust healthcare delivery system and the realisation of the agenda of industrial transformation that held the key to future prosperity.

Besides, the President said, the enhancement of agricultural productivity to guarantee the prospects of food security, the execution of the comprehensive infrastructural development plan in roads and railways, the conclusion of the digitalisation process to obtain the full benefits of the Fourth Industrial Revolution and the protection and greening of the environment to address climate change would be pursued vigorously.

President Akufo-Addo reiterated his commitment to the empowerment of the security services to consolidate the peace, security and stability of the nation.

That commitment, he explained, would also lead to the establishment of a free and just society, where entrepreneurship and individual initiatives were the sources of wealth creation, with a strong social safety net for the marginalised and disadvantaged.

He added that the government would continue to pursue the improvement of the governance architecture to deepen accountability and respect for the rule of law in our body politic.

The Presiding Bishop of the Methodist Church of Ghana, Most Rev Dr Paul Kwabena Boafo, recounted the church's immense contribution to national development and pledged that it would continue to do all it could to support accelerated development.

He praised the government for its pro-poor policies including the free Senior High School policy which he said had contributed to the increase in enrollment and youth literacy in the country.

Most Rev Boafo commended the President for participating in the conference saying it was the first time a head of state had attended their conference since he became a priest.

He pledge the continuous partnership of the Methodist Church and the government to help operationalise policies and programmes geared towards improving the lives of Ghanaians.