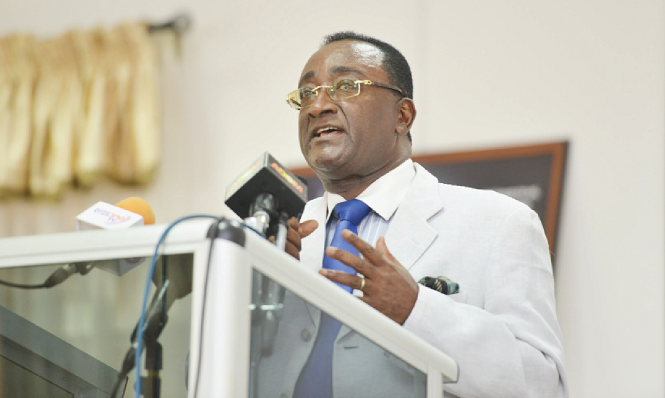 The Minister of Food and Agriculture, Dr Owusu Afriyie Akoto, has expressed concern over the reported number of trucks said to be smuggling food items, particularly grains, to neighbouring countries in spite of the ban on such activities.

It had been a common sight to see long queues of articulated trucks with foreign number plates at some major markets waiting to cart food items, particularly along the border towns in the north, although export activities were regulated in the country.

For instance,16 articulated trucks loaded with food items were detained at Tatale and returned to Tamale last year, while in the Upper East Region, a truck loaded with 160 bags of grains were also ceased and later said to have been sold to the public.

According to the minister, such acts contravened President Nana Addo Dankwa Akufo-Addo’s directive banning the exportation of food items to neighbouring countries.

The President last year issued a ban on the exportation of food items such as maize, beans, sorghum and rice as part of measures to ensure food security in the country.

Dr Akoto was speaking after embarking on a tour of three regions of the north to assess the food situation in those areas following the closure of the farming season last December.

He was briefed on the situation during an interaction with the regional ministers and their respective Directors of Agriculture who confirmed that there was the movement of food items across the borders.

Dr Akoto tasked the ministers to immediately call for an emergency Regional Security Council (REGSEC) meeting to address the issue.

According to him, the decision by the government to ban the exportation of food items was because “we need to have sufficient grains for our consumption and also for the poultry industry”.

“The fact is that we need to secure whatever we produce because the taxpayer is the one that must benefit,” he added.