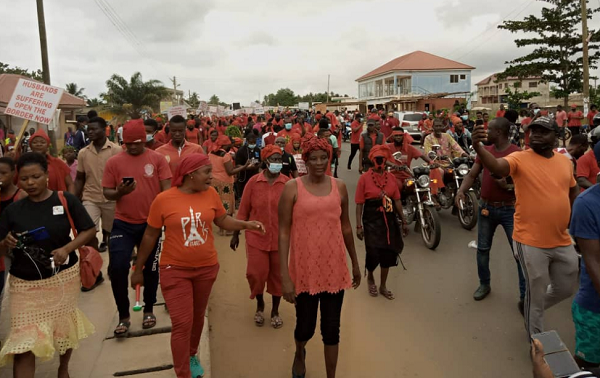 Hundreds of residents in the Ketu South Municipality in the Volta region on Friday (August 27, 2021) hit the street to protest and demand the reopening of the Aflao border after months of closure.

The residents said air borders which were closed together with land borders due to the outbreak of the coronavirus disease ( COVID 19) pandemic have been reopened for months but there are no attempts to replicate the same for land borders.

They are therefore calling the government to open the land borders since they play an important role in their economic activities.

President Akufo-Addo in a nationwide broadcast on the outbreak of the disease in March 2020 directed the closure of all borders in Ghana — land, sea, and air — to human traffic.

The closure, however, did not apply to goods, supplies, and cargo.

“All our borders, that is, by land, sea, and air, will be closed to human traffic for the next two weeks, beginning midnight of Sunday. Anybody who comes into the country before midnight on Sunday will be mandatorily quarantined and tested for the virus,” he said.

Whilst air borders were reopened in September 2020, land borders have remained closed.

Clad in red and black attire and hoisting placards on the street, the aggrieved residents chanted war songs with the hopes that government heeds their call.

Some of the inscriptions on their placards include, ‘Border closure collapsed our businesses’, ‘Hunger is more deadly,’ ‘Mie Fu Kpem,’ among others.

The demonstrators urged the government to implement the same measures being used at the airports at the borders.

They decried hardship due to the closure of the Aflao border and pledged to follow all the Covid 19 protocols if the borders are opened.

“Some of the measures put at the airport should be put at the borders where people can manage to follow protocols to go about their daily activities”, a protester stated.

They added that “We are suffering, people are dying out of hunger. When the government listens to us posterity will judge him….we are appealing, whoever is listening in Africa, in the world, in Ghana, someone must listen to our plea and speak to Nana Akufo-Addo that we are hungry, we cannot pay school fees for our children and we want the borders to be open”