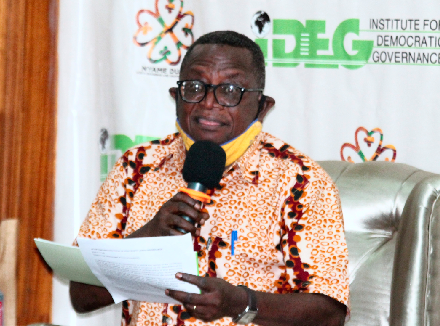 A Senior Research Fellow at the Institute of Democratic Governance, Mr. Kwesi Jonah, has called for the introduction of a mixed member proportional representation system at the local government level.

Whatever is left; 60 or 70, you can have women’s candidates contesting for those seats as well. But to begin with you have 30 or 40 per cent of the seats reserved for women already,” he said.

Under the arrangement (system), he said, political parties contesting could field their candidates for the 70 or 60 per cent, adding that “at the end of the day, we are already sure that 30 or 40 per cent of women would be elected on the proportional representation and those who contested on the other one (70 or 60) would also be added on to it.”

Mr. Jonah was contributing to discussions at the 2021 Ghana Speaks Lecture Series organised by the IDEG last Tuesday in Accra.

It was on the topic: “Reconstructing Local Governance and Multiparty Democracy in the Fourth Republic: Proposals”, in Accra last Tuesday.

He said the proposal for the mixed member proportional representation system was based on the recent nomination of 260 perons for MMDCEs, with women being only 38.

“The mixed member representation is something that the Electoral Commission (EC), under its former Chairman, Dr. Kwadwo Afari-Gyan, recommended at the local level. We are 100 per cent behind the Affirmative Action Bill ...but we think that the quickest way to increase women participation at the local level is the mixed member proportion representation system,” he said.

He said since 2016, there was no representation of persons from the smaller parties in Parliament and that if the mixed member representation system was accepted; it would solve the problem of women at the local level, among other things.

He said right now the first past the post system which produced stable government was good for the national level but when it came to the local level and there were parties that were not financially strong, there would be the need for a proportional representation that would ensure that any party, regardless of what was in their bank account and was able to cross a certain threshhold, would have some members in the various assemblies.

Mr. Jonah also called for the setting up of a local council for governance and development which would be made mainly of chiefs but free to co-opt other professionals such as lawyers, teachers and doctors.

The council, he said, would engage in a number of activities, including conflict resolution, advice and make lands available to local government.