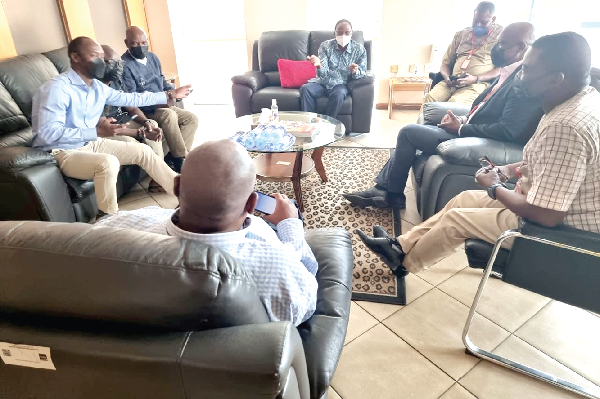 The Executive Management of Nation Media Group (NMG) of Kenya held a meeting with its counterpart, the Graphic Communications Group Limited (GCGL) in Accra yesterday to explore further ways of cooperation.

The meeting was aimed at deepening their already existing ties to tell the African story better.

The NMG also used the meeting to announce an upcoming major conference, dubbed “Kusi Ideas Festival,” scheduled to take place in Accra from December 10 to 11, this year, and thus, solicited the support of the GCGL.

The meeting was attended by the Managing Director of GCGL, Mr Ato Afful; the Director, Sales and Marketing of GCGL, Mr Franklin Sowa, and the Editor of the Daily Graphic, Mr Kobby Asmah.

The NMG team was led by the Group Chairman, Dr. Wilfred Kiboro, and included the Group Chief Executive Officer, Mr Stephen Gitasama, the Non-Executive Director of the NMG, Mr Wangetti Muangi, and the Head of External Affairs and Marketing of the NMG, Mr Clitterd Mactoka.

The NMG conceptualised the Kusi Ideas Festival three years ago as a “Pan-African ideas transaction market” to capitalise on the opportunities and innovations available to Africa to help her win in the 21st Century.

It is also aimed at creating a continental platform for Africans to talk about Africa, share ideas and tell the African story in such a way that it will project a positive image of the continent to the global community as well as enhance living standards among its people.

The inaugural festival in Kigali, Rwanda, on December 8-9, 2019, was co-hosted by President Paul Kagame, under the theme, “The Next 60 years in Africa”.

The second edition of the festival, hosted under the theme “Towards a Post-Covid Africa: Recovering Together” was held against the backdrop of a global pandemic and sought to explore the impact of Covid-19 on the African continent and the innovations, opportunities and partnerships that will enable it to survive and thrive in a post pandemic world. It was attended by 14,000 participants virtually - from 44 countries and 83 major cities - and 230 delegates in person.

The 3rd edition of the festival is slated to take place at Accra International Conference Centre under the theme “How Africa Transforms after the Virus.”

This year’s conference, which will be a hybrid virtual-and-in-person event, comes nearly two years into the Covid-19 pandemic that has suspended the world and Africa in ways nothing else has in nearly eight decades.

President Nana Addo Dankwa Akufo-Addo will host the Festival. The NMG has already partnered with Ghana Tourism Authority through Ministry of Tourism, Arts & Culture to organise the festival.

According to the GCGL and NMG, it was time for Africa to get its narrative right to tell relevant African stories that would scale up the continent for accelerated growth and progress.

The two groups further agreed to strengthen content and cultural exchanges as well as hold regular virtual meetings to keep discussing key issues that bordered on the continent as well as help to change the negative narrative of Africa as told by the Western media.

In the view of Mr Kibaro, there was the need to set the African agenda right.

He catalogued a number of issues that were happening on the continent, including AfCFTA and how Africa could collaborate to boost trade within the continent.

“How can we envisage Africa in the next 60 years; How will it look like; Can Africa withstand another pandemic different from COVID-19?” he asked.

These are issues that must be of concern to all of us, he posited, saying “‘jointly, GCGL and NMG can do a lot better in not only reporting and telling the African story but also to set the African agenda.”

He urged the GCGL to come on board the upcoming conference as a partner and actively participate to make it a success.

He said it was very imperative for a media group such as GCGL, with a neutral mandate, to play a frontal role in helping to tell the African story and raise the relevant issues that would steer the continent in the right path.

Mr Afful, for his part, underscored the importance for a renewed role of the journalist in telling the African story particularly in a post-COVID-19 era.

He said there was the need for a continentally driven journalist who will not shy away from raising all the challenges and yet also telling the success stories as well.

As a state-owned media, Mr Afful said the GCGL was mandated to play that role and he was happy the group was doing that very well.

He pledged the commitment of GCGL to collaborate more positively with the Nation Media Group to work together to change the narrative about Africa which mostly was hinged on negativity.

Mr Asmah bemoaned the manner in which stories emanating from the continent were reported.

He noted with regret that many a time, it was Africa’s own journalists who led in reporting Africa mostly in a negative light.

He said there was the urgent need to reorient African journalists to see the need to report fairly on what was happening in and around the continent.