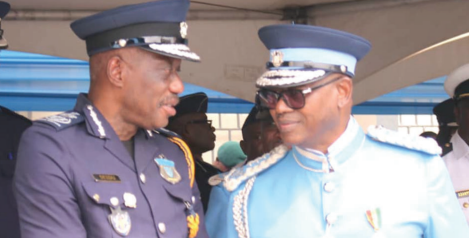 The Customs Division of the Ghana Revenue Authority (GRA) exceeded its revenue target for last year, with a collection of GH¢22.26 billion.

The amount was 7.98 per cent more than the GH¢20.62 target given the division, the acting Commissioner of Customs, Iddrisu Iddisah Seidu, has said.

Speaking at a pull-out ceremony for the Tema Sector Commander, Julius Aweya Kantum, Mr Seidu said whereas some recalcitrant traders occasionally attempted to pass on fake invoices in the processing of import declarations, the division continued to update the skills of its officers to ensure they detected and enforced trade compliance among stakeholders.

The ceremony was attended by some of the retiree’s family and friends, retired Customs officers, including six former Sector Commanders, as well as two Commissioners of Customs, Wallace Akondor and John Vianney Kudamnuru, who also served as Tema Sector Commanders prior to their promotion to commissioner positions.

Many stakeholders from the port community were also at the ceremon which saw Mr Kantum also honouring some deserving officers of the Command for their dedication to duty during his tenure of office.

Mr Seidu noted that whereas the presentation of fake invoices to undervalue import declarations may not be peculiar to Ghana, the removal of the benchmark discount by the government would allow for the application of universal valuation and classification system of goods.

Similarly, he said, whereas some importers might attempt to undervalue purchase prices on their invoices in order to beat down the amount of import duty, there were those who also overvalued their invoice prices.

"For those with exemptions as well as agreements that allow them to repatriate their profits and capitals, they often overvalue their goods through the misrepresentation of the price, as well as the quantity or quality of imports/exports to enable them to take back more money than they should," Mr Seidu pointed out.

Overvaluation or over-invoicing consists of deliberately and fraudulently inflating the price of goods, and involves collusion between the importer and exporter. 2023 Target Mr Seidu also announced that whereas the GRA had been tasked with a revenue target of GH¢106 billion for 2023, the Customs Division alone was expected to raise GH¢28.5 billion of the target, with the division's top management also charged with the responsibility of an additional GH¢12 billion, raising the figure to GH¢33.5 billion.

Commander for his discipline to work and achieving great successes over 37 years of service, Mr Seidu challenged the officers and the port stakeholders to cooperate with the new sector commander who took over the baton of office from Mr Kantum.

"Mr Kantum has contributed towards the growth and expansion of Customs from the early 1985 and has shown great leadership in the various roles he served and I am certain that many of the people who have worked with him at various points in time," Mr Seidu said.

Mr Kantum in his remarks expressed joy that the Tema Collection was able to exceed its annual target.

"It is no secret that when Tema Collection performs very well and exceeds its target by a high percentage,it takes care of the shortfalls of other collections to ensure that the national
target is achieved or exceeded," he said.

Mr Kantum was posted to the Command in 2021, having previously served as the Ag. Deputy Commissioner in charge of Preventive.