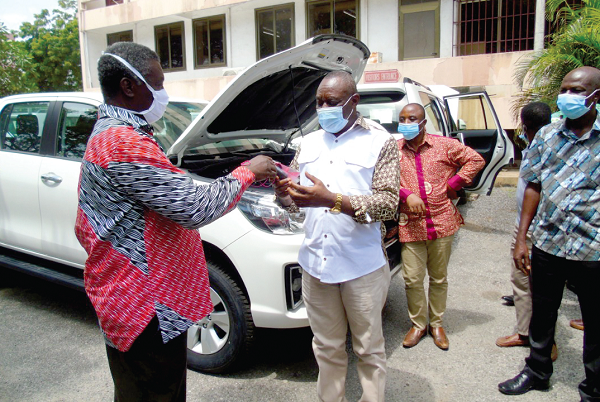 The government has presented 20 new vehicles to the Environmental Protection Agency (EPA) to support field activities across the 16 regions of Ghana.

The vehicles are made up of 10 Toyota pick-ups and 10 Toyota Land Cruisers.

The Minister of Environment, Science, Technology and Innovation (MESTI), Professor Kwabena Frimpong-Boateng, handed over the vehicles to the Executive Director of the EPA, Mr Henry Kokofu, in Accra Friday, and expressed the hope that the vehicles would facilitate the work of the agency in the discharge of its duties.

Prof. Frimpong-Boateng explained that the work of the EPA was crucial in protecting the environment, hence the need to ensure that the agency was well equipped to carry out its duties effectively.

He noted that over the past years, a lot had been happening in the environment space, and that the EPA had been up to the task.

“EPA is one of the most important agencies in the country because, in the world, everything revolves around the environment, and if you get it wrong, everything will be wrong. So to do their work well, they need to be mobile, and the vehicles will help them in doing that.

“We think that all the regions, including the new ones, will have a vehicle each to facilitate their work, and with that, I know they are going to deliver on their mandates and give us the expected results”, the minister said.

Mr Kokofu received the vehicles on behalf of the EPA, and commended the government for liaising with the sector ministry to address challenges facing the agency.

He said the agency was challenged mainly by under-staffing along with a list of other difficulties, including the lack of vehicles for official duties.

He indicated that the EPA was hoping to recruit more personnel in the coming year although government had given the agency the approval to recruit 250 staff this year.

Mr Kokofu also called on government to consider acquiring a new office space for the agency that would match the work the agency did.

Despite the challenges, Mr Kokofu emphasised that his agency was determined to deliver on its mandate, and expressed confidence that the vehicles would help in achieving that.

“It is in our domain as an agency to ensure the protection of our environment and our natural resources, and we pledge that we shall never disappoint you and we shall put to use the vehicles that you have given us to deliver on our mandate”, he assured.