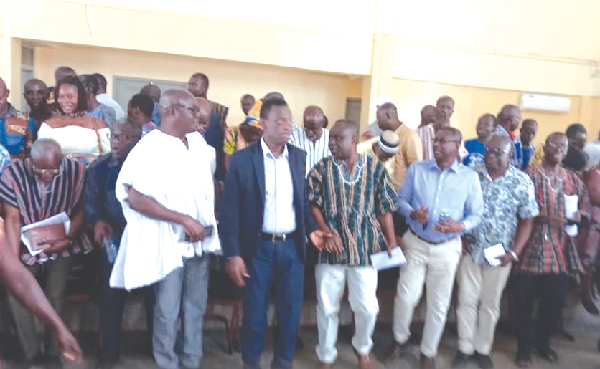 For the first time, the government has announced minimum producer prices for oil palm and rubber across the country.

The Tree Crops Development Authority (TCDA), which has been charged with the regulation of the tree crops sector, set the maiden price for oil palm at GH¢1,252.92 per tonne, and rubber at GH¢4.9167 per kilo.

All off-takers are expected to use the minimum prices from this month.

The move is a departure from the uniformed and unregulated pricing that prevailed in the tree crop subsector to the disadvantage of the farmers.

At a ceremony to announce this at Sekondi in the Western Region, the Minister of Food and Agriculture, Dr Owusu Afriyie Akoto, in a speech read on his behalf by the Deputy Minister for Food and Agriculture in charge of Crops, Yaw Frimpong Addo, said TCDA would regulate and develop in a sustainable environment the production, processing, pricing and marketing of the country's six tree crops.

Dr Akoto said the authority was currently leading the agenda for the diversification of the country's agriculture sector.

The Western Regional Minister, Kwabena Okyere Darko Mensah, said the government remained committed to the agriculture sector and that the region was dominant in the production of tree crops.

“We are happy that after all the hard work to get the best for farmers in these tree crops which we in the Western Region lead the way, the announcement of price for rubber and oil palm is taking place in our region,” he said.

He expressed the hope that replacing the old system with the minimum producer prices for oil palm and rubber would not only improve the lot of the farmer, but would serve as great motivation to ensure that more people ventured into the area.

The Chief Executive of the Tree Crops Development Authority, William Quaitoo, explained that before the announcement, there were a series of stakeholder engagements to ensure that all stakeholders benefited.

He explained price build-up and how the monthly price was arrived at, adding that “through the interactions the farmers themselves came up with various innovations to ensure that they work with rules and get all the benefits.”

One of the farmers from Samahoo, near Bogoso in the Prestea Huni-Valley Municipality of the Western Region, Ismaila Mohammed, said hitherto, off-takers paid less than GH¢800 per tonne for oil palm and that with the new minimum producer prices for oil palm there would be some control.