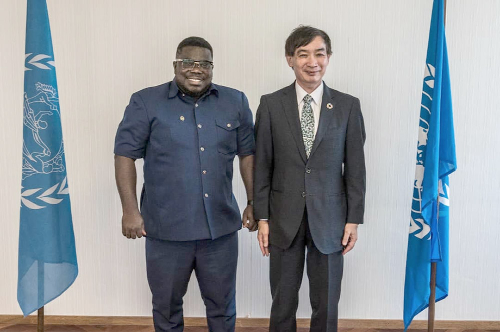 The Managing Director (MD) of Ghana Post, Bice Osei Kuffour, has called for more cooperation between the Universal Postal Union (UPU) and Ghana Post to enable the company to deepen its role as the designated postal operator in the country.

He said the support of the UPU was crucial to enable Ghana Post to roll out more digital services and establish a robust domestic and cross-border e-Commerce service in Ghana.

The Ghana Post MD made this request when he and the Director of Posts at the Ministry of Communications and Digitalisation, Sulley Lugey, paid a courtesy call on the Director General of the UPU, Masahiko Metoki, at the ongoing Council of Administration Session of the UPU in Berne, Switzerland.

At the meeting were the Director of Development and Cooperation, Mr Mutua???, and the Senior Special Adviser to the Director General of the UPU, Akio Miyaji.


Mr Kuffour congratulated the Director-General on his election to the high position of the UPU, the specialised agency of the United Nations in postal matters.

For his part, Mr Metoki welcomed the MD to the postal fraternity and congratulated him on his appointment to lead an important state organisation, which had a huge global influence.

The Director-General also recalled with much appreciation the huge support that the Minister of Communications and Digitalisation, Ursula Owusu-Ekuful, and the entire government of Ghana offered Japan for his candidacy during the Abidjan Congress where he was elected.

Mr Metoki also congratulated Ghana Post on winning several UPU awards over the years and encouraged Mr Kuffour and the entire staff of Ghana Post to sustain the feat.

In response to the MD’s call for UPU support to build capacity for the staff of Ghana Post, Mr Metoki assured him that Ghana Post would surely benefit from an e-commerce project for Africa, which would be launched in Abuja, Nigeria this month.

The UPU Director-General said the project sought to strengthen the postal regulations in the e-commerce space, sensitise governments to the need to empower the designated postal operators to enable them to offer several services in the e-commerce value chain and enhance the digital inclusion initiatives of the Post in Africa.

The Director-General again assured the Ghana Post MD that his request for Ghana Post to benchmark best practices with some sister postal administrations would receive the needed attention.

In a similar development, Mr Kuffour held engagements with a delegation from the United States of America (USA).

The discussions focused on the security of mail exchanges between the two countries, which had suffered some challenges of late.

Similarly, the Ghana Post MD engaged the Secretary-General of the Pan African Postal Union (PAPU), Chief Shifondu Moyo, as well as several private mail operators who were also participating in the conference.

Ghana is an elected member of the Council of Administration of the UPU, which is responsible for ensuring the smooth operations of the union between congresses.