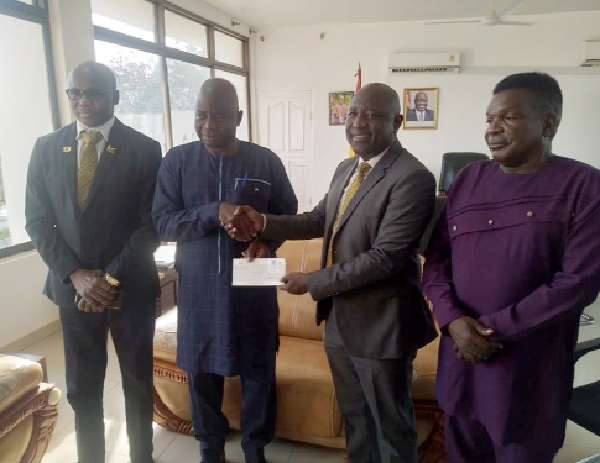 As part of efforts to ameliorate the plight of thousands of residents and farmers heavily affected by the recent floods due to spillage of the Bagre Dam in Burkina Faso, the GCB Bank has donated an amount of GH₵100,000 to victims in the Upper East Region.

The gesture is to assist the regional office of the National Disaster Management Organisation (NADMO), to procure relief items and extend financial assistance to the thousands of victims towards addressing some of their basic needs.

Speaking during a handover ceremony last Wednesday, the Regional Manager of the bank in charge of the five northern regions, Alhaji Mohammed Mipo, said the gesture was in response to a request to the bank from NADMO, for support to the thousands of people who were heavily affected by the annual floods.

He noted that management and the board of the bank decided to heed to their request as part of the bank’s corporate social responsibility.

He said “as a bank, we believe that this support will go a long way to cater for some of the needs of the victims and put smiles on their faces as well,” adding, “at least this timely support will enable the victims to put their lives together and go about their daily activities”.

“Although, many of the victims lost their source of livelihood, including farm produce and other personal belongings, we are optimistic that this support will enhance their lives in these trying times,” he stated.

He expressed the bank’s hope that the government would find a lasting solution to the spillage, which had become a perennial problem for victims to annually lose their investments in terms of farm produce and properties.

He said “I do not think this is something that should be allowed to continue annually and the regional coordinating council must take the necessary steps to address the problem for the benefit of the people.”

He stressed that it was a worrying development for residents of the affected communities to go through such an ordeal of losing their livelihoods annually, noting “the government must tackle the problem once and for all to protect lives and properties.”

Receiving the cheque, the Upper East Regional Minister, Stephen Yakubu, said it was an open secret that NADMO, as an institution, did not have enough resources and relief items to cater for disaster victims.

He commended GCB Bank Limited for positively responding to the request to come to the aid of the victims of the recent floods in the region, saying “this support will go a long way to touch the lives of the victims who were anxiously waiting to receive assistance from the government.”

For his part, the Upper East Regional NADMO Director, Jerry Asamani, said the financial support would bring huge relief to the thousands of affected victims, saying “with this financial support, we would purchase some food items for onward distribution to the victims”.

Additionally, he noted that similar support would be extended to refugees from Burkina Faso who were currently seeking refuge in the Bawku Municipality as well as Bawku West and Binduri districts in the region due to political instability.

He assured the bank that the money would be judiciously used for the intended purpose and that proper accountability would be rendered to them so as to cement the relationship between both institutions.