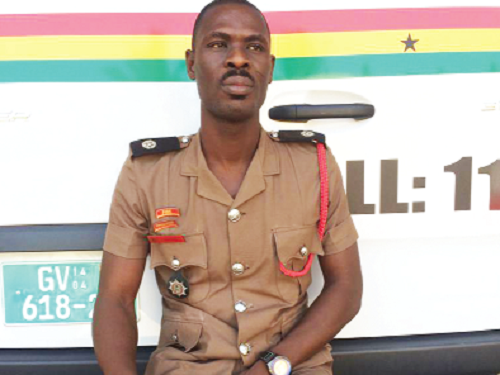 A rescue operation by the Agona West Municipal office of the Ghana National Fire Service (GNFS) turned tragic when an officer drowned in a 40-feet deep well at Gomoa Oboasi in the Gomoa Central District in the Central Region last Saturday.

Two men were trapped while working in the well, and subsequently the owner too, in an attempt to rescue them.

ASO Baidoo was said to be eating at the time the distress call came from the community but he abandoned his food to lead a team of officers to the site of the well.

The fire officer descended into the well around 8:30 a.m. and managed to rescue the owner of the well and the two workers, Nana Kwame and Nana Yaw, but fell into the well from a height and died as the rope around his waist loosened when he was being pulled out of the pit after his rescue effort.

It took reinforcement from the Winneba office of the GNFS before his lifeless body was retrieved from the well after about two hours.

The deceased’s body has since been deposited at the Swedru Government Hospital morgue for autopsy, while the three persons who were rescued are receiving treatment at the same facility after gaining consciousness.

The tragedy attracted a crowd within minutes as the news travelled through the community, with many abandoning funerals and other social gatherings momentarily to reach the scene of the disaster.

As the crowd thickened, the situation became chaotic, necessitating a police intervention to control matters.

The Chief Executive of the Gomoa Central District Assembly, Mr Benjamin Kojo Otoo, has described the incident as “tragic and sad”, saying “both the deceased’s family and the GNFS had lost a young and vibrant officer with great potential who unfortunately died in the line of duty”.

He expressed the government’s condolence to the family, and indicated that the assembly would offer the needed support towards the burial of the late fire officer.

Meanwhile, scores of well-wishers and sympathisers, including the Chief of Gomoa Otaprow, near Agona Swedru, Nana Osompa Nyamekye II, have visited the immediate family of the deceased fire officer to console the wife and the children at his residence.

The wife wept uncontrollably as the family received the visitors, which also included some colleagues of the late husband.