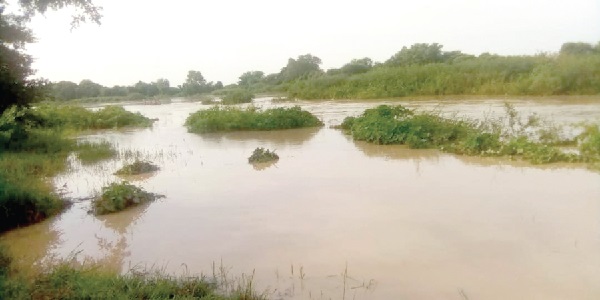 Some farmers counting their losses after the spillage
30.5k Shares

Farmers operating along the downstream areas of the White and the Black Volta rivers are bearing the brunt of the spillage of excess water from the Bagre and the Kompienga dams in Burkina Faso, as hundreds of hectares of farmland have been submerged by floodwaters.

No life has been lost, but rice, millet and sorghum farms have been completely wiped out and affected farmers are at their wits’ end as to what to do.

The situation, which has affected a number of communities in the Mamprugu/Moaduri District and the West Mamprusi municipality in the North East Region, has been compounded by torrential rains.

When the Daily Graphic visited some of the affected areas last Saturday, it saw that farmlands in the low land areas were all submerged.

At Kpasenkpe in the West Mamprusi municipality, the situation appeared to be more devastatingm as about 100 acres of farmland had already been destroyed.

A farmer, Alhassan Sumani, whose 15-acre farm had been affected, said he could not salvage the crops.

"I am just devastated because the farm which has been destroyed is the only source of livelihood for the family. Now, I don't know what to do because all my investment has gone waste," he said.

Another farmer, John Sibiri, whose story was not different, appealed to the National Disaster Management Organisation (NADMO) and benevolent organisations to go to their aid to help alleviate their plight.

Asked why they failed to relocate to higher grounds, despite warnings from the authorities, he said: “We are aware of the dangers but we have no option."

"The land is not enough for the people around the area so we are compelled to farm along the river.”

The North East Regional Director of NADMO, John Kwaku Alhassan, in an interview, said adequate mechanisms had been put in place to provide relief items and accommodation for persons who would be affected by the disaster.

Aside from that, he indicated that NADMO officials had been deployed to patrol the flood-prone areas to rescue persons who might be trapped by the floodwaters.

He expressed the hope that no casualty would be recorded from the flooding.

Mr Alhassan, however, urged residents of flood-prone areas to relocate to higher grounds for safety.

Meanwhile, the Director General of NADMO, Eric Nana Agyemang Prempeh, who just completed a tour of flood-prone areas in the Northern, North East and Upper East regions in preparation for the spillage of the two dams, told the Daily Graphic yesterday that chiefs in those areas were helping NADMO in the effort to get the people to move to higher grounds.

Nevertheless, he assured the people that “NADMO is ready to respond to any disaster as a result of the spillage”.

He said he had paid a courtesy call on the Overlord of the Mamprugu Traditional Area, Naa Bohagu Mahami Sheriga, and appealed to him to help in the ongoing sensitisation exercise, so that people in his traditional area who lived around river bodies would relocate to higher grounds.

He also held meetings with the North East Regional Disaster Management Committee and other stakeholders.

In the Northern Region, he said, he had paid a courtesy call on Ya-Na Abukari II at the Gbewaa Palace in Yendi, where the Overlord of Dagbon had praised NADMO for the sensitisation campaign, with a testimony of listening to the messages on radio stations in Dagbon, and promised to add his voice to the messages.

SONABLE Company Limited, operators of the Bagre and the Kompienga dams, on September 1, 2022, announced the spillage of excess water from the dams.

That followed the significant rise in water levels of the two dams.

The spillage is expected to affect low-lying areas along the White and the Black Volta in 28 districts in seven regions.

In a statement, NADMO mentioned the regions as Upper East, Upper West, Northern, Savannah, North East, the northern part of Oti and the Afram Plains in Eastern.