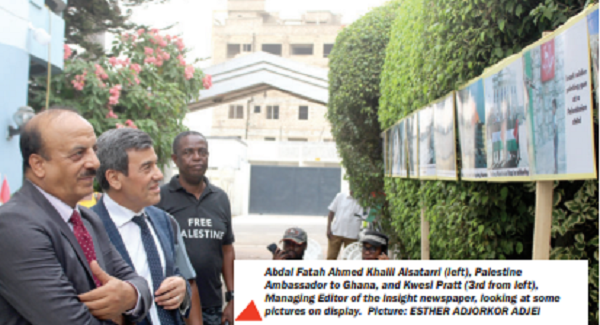 The Embassy of the State of Palestine has organised photo exhibition to depict the pain, suffering, agony, and tribulations of its people with regard to the ongoing conflict in the area.

The exhibition of about 30 high-resolution photographs mounted on the walls of the premises of the Pan African Television where the event was held last Thursday depicted various scenes of the conflict.

They included soldiers holding guns to the heads of civilians, some of whom were children, remnants of bombed buildings and settlements, arrests, civilians confronting armed military men and women hugging trees to protest cutting them down, among others.

Held on the theme: “Palestine: A Case Of Occupation And Apartheid”, the event was graced by several members of the diplomatic community, religious heads, state officials, and friends of Palestine and others.

The exhibition, therefore, served as a means to draw the attention of the general public to the plight of the Palestinian people and galvanise solidarity in their fight for peace and liberation.

It was also to honour the late Shireen Abu Akleh, a journalist who worked for Al-Jazeera, killed by forces in Gaza on May 11, 2022 and Palestinian freedom fighter, Nasser Abu Hmaid, who died in Israeli prison last month.

The Ambassador of the State of Palestine to Ghana, Abdalfatah Ahmed Khalil Alsattari, reiterated his nation’s resolve to continue fighting for independence.

He said in spite of being oppressed for about seven decades, the spirit of the Palestinian people was still strong because they were confident decency and justice would prevail over aggression.

The ambassador, therefore, stated that there would be no peace in the Middle East until there was the establishment of an independent Palestinian state with Jerusalem as its capital.

For his part, the Managing Editor of the Insight Newspaper, Kwesi Pratt Jr, called on world leaders to refrain from being silent about the injustice facing Palestine, adding that there could be “no neutrality when it comes to the struggles of the Palestinian people”.

He added that collaboration with Israel would yield no result and for that reason, the exhibition was to signify the fight for the liberation of all people from the yoke of colonial
occupation and all forms of racism and apartheid.

The Member of Parliament for North Tongu, Samuel Okudzeto Ablakwa, urged the government to use its position as a member of the United Nations Security Council to seek justice for the people of Palestine.

“The leaders of Israel must be told in clear terms that the world is grappling with enough conflicts, making global economic situations dire and we cannot endure any fresh rounds of new provocations,” he added.

He, therefore, encouraged the people of Palestine to always count on Ghana because the country had always stood with Palestine regardless of which government