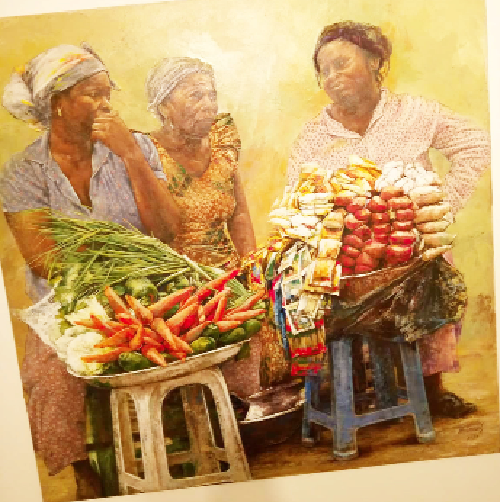 For someone whose dream of becoming an artist was hugely supported by his mother, a market woman, contemporary artist Emmanuel Adiamah seizes any opportunity he gets to show appreciation to market women through his work.

This is because often times when celebrating female entrepreneurship, market women are excluded from the conversation, yet they also play a vital role in the country’s economy.

Adiamah just loves to celebrate market women whose work involves long hours and physical abour, and he is at it again with an exhibition dubbed Downtrodden Bits of Reality at the 1957 Gallery located at Kempinski Gold Coast City Hotel, Accra recently. 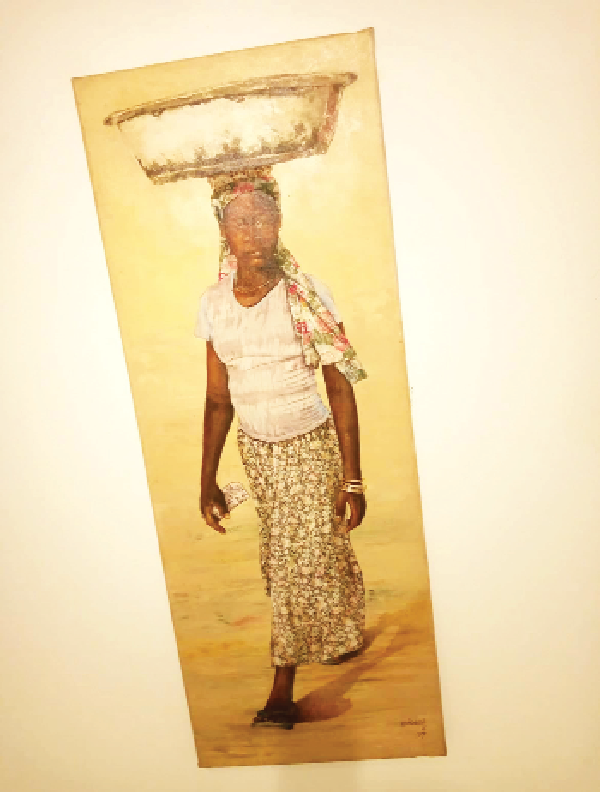 With Downtrodden Bits of Reality, Adiamah captures essential elements of local Ghana through the activities of market women who most times are the breadwinners. His focus lies on these individuals whose collective contributions make the local hubs and trade centres the culture powerhouse they have become famed for.

His latest exhibition showcases a fascinating insight into unadulterated Ghanaian market culture through his full realm of remarkable genius and captivating imagery.

With intricate detail, passionate expressions and immense experiences employed in his art, Adiamah’s works provide an introspective assessment of typical market life: from vivid representations of the lone preacher singing over the microphone, to the “kayayo” who idly wanders with an empty basin.

His pieces are an all-inclusive memoire of life underneath the canopy of tattered umbrellas and creaky wooden stalls as a safe home for market women.

Adiamah’s most desired images are renderings of the women who dominate the market populace. Through his visual life story, he pays homage to them for their toil, struggle and sacrifice.
His paintings depict them seated behind their unstable stalls of recycled crates and plastic buckets, arranging and re-arranging their wares in an attempt to exhibit the freshest and most attractive.

His inclusion of the raffia sun hats and loosely tied head wraps go further to describe their ways at evading the sun that shines unforgiving on their fast-wilting fresh produce. From Adiamah’s works, it is easy to appreciate the hardiness, diligence and of market women. 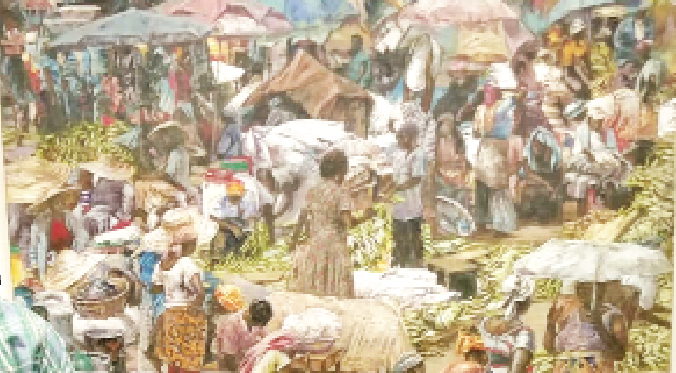 In an interview with the Daily Graphic, Adiamah explained he touched on the subject of market women to draw attention to their contributions to the economic development of the country.

According to him, the campaign of women empowerment had mostly been limited to women in white-collar jobs. However, the contributions of market women to social and economic growth could not be downplayed.

“Women are powerful and the role of market women is particularly commendable. They have created jobs, provided incomes for households, ensured food security and sufficiency and provided a platform for generational development of entrepreneurial skills and competence.

“However, their roles in the informal economy have been constrained by the inadequate basic infrastructure in the markets and limited resources that will help their business thrive. Hence, Downtrodden Bits of Reality focuses on these shortcomings, as well as brings to light their economic roles which go unnoticed,” he said.

In Africa, markets have become listed sites of historic and architectural significance and are often popular tourist destinations. However, in the eyes of Adiamah’s subjects, the market remains a haven for these women who earn their daily bread to support families.

Adiamah’s work has, through the years, gained local and international recognition. He studied at the Kwame Nkrumah University of Science and Technology (KNUST), Kumasi and graduated in 1985. He then taught Art in Takoradi till 1993, after which he returned to KNUST for a master’s degree in Art Education.

Although he is currently not actively teaching, he regularly organises talks in his studio for students from senior high school to college or university level.

His art has been exhibited in major museums around the world and can be found in some of the prestigious public and private collections worldwide.

Still Hoping (2000), Our Way of Life (2000), Negotiation (2001) and Divided Attention are just a few of Adiamah’s artworks that have been offered at major auction houses and galleries around the world, with realised prices depending on the size and medium of the artwork. Divided Attention sold at Bonhams New Bond in 2018.

He expressed his appreciation to Gallery 1957 for creating a continuous platform for West African artists to showcase their works to the world.

Presenting a programme of exhibitions, installations and performances by the region’s most significant artists, the gallery has been a vital platform promoting West Africa’s presence within the arts scene by hosting ambitious exhibitions, proving resources for residences and participating in international arts fairs.

“I’m thankful to Gallery 1957 for supporting this exhibition,” Adiamah concluded.