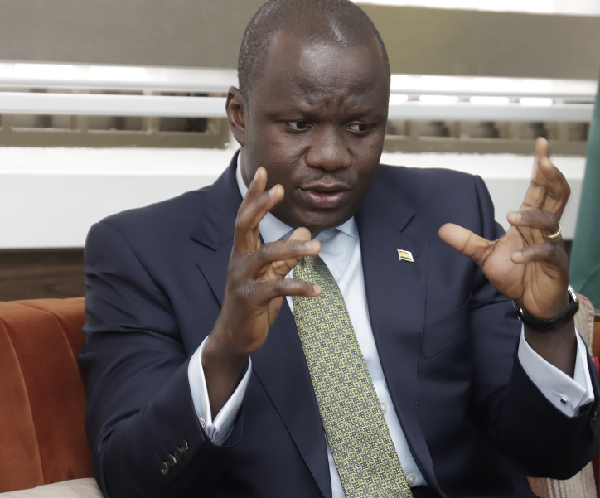 A nationwide exercise has begun to clamp down on encroachers of quarry sites. A multi-stakeholder team, comprising security persons and the regulatory agencies, is being deployed by the Ministry of Lands and Natural Resources to the quarry sites to halt illegal human settlement activities within those concessions.

The sector Minister, Samuel Abu Jinapor, who disclosed this to the Daily Graphic on Tuesday (April 5, 2022), explained that the exercise formed part of a gamut of measures the government was rolling out to protect Ghana’s quarry sector from imminent collapse.

He stressed that given the critical role the quarry played in national development, the lack of respect for regulations relating to quarry operations would no longer be countenanced.

He also said it was unacceptable for some metropolitan, municipal and district assemblies (MMDAs) to issue permits to individuals to put up structures in buffer zones or within quarry concessions, promising that efforts would be made to cure such a systemic challenge.

The minister was reacting to the Daily Graphic’s lead story in last Monday’s edition which said Ghana risked importing stones and other quarry products in the next 10 years if nothing was done to halt encroachment activities on quarry concessions.

It further indicated that although the quarry sector had the potential to rake in GH¢100 million in royalties to the state annually, only GH¢3.5 million was recorded.

Again, the 2018 Ghana Industry report showed that out of the 146 registered concessions for quarry operations, less than 60 of them were in operation.

It added that even with those quarries that were operational, none of them produced beyond 50 per cent of their respective rated capacities.

The figures also showed that only about 20 per cent of the country’s capacity, translating into seven million tonnes of granite, was produced annually.

Against, that backdrop, the Lands and Natural Resources Minister stressed that the fight to protect quarry concessions would hinge on the enforcement of Regulation 176 of the Minerals and Mining Regulations, 2012 (L.I. 2177), which states that a manager of a quarry site shall ensure that for any explosion, there is a 500-metre minimum safety distance between a blast and a person near the blast site.

The regulation adds that the manager must ensure that the size of the exclusion zone is increased if flying rocks from the blast can travel beyond the minimum safety distance of 500 metres.
Mr Jinapor said to the extent that Regulation 176 of L.I. 2177 proscribed human settlements within the range of at least 500 metres close to the quarry site, every effort would be made to enforce the law.

"My position on this issue is that whatever steps we will take to enforce the regulations, we will do. We will take the enforcement drive to the doorstep of the encroachers," he stressed.
When asked how soon the law would be enforced, he stressed: "We will activate the enforcement as soon as yesterday. One of my deputy ministers is chairing a committee on this enforcement issue and I am not sure that I will serve notice to encroachers on when security persons will operate in their enclave."

Mr Jinapor indicated that the ministry was working on a proposal for quarries to be exempted from the list of minerals that needed parliamentary ratification for their licences to be valid.

He explained that Article 268 of the Constitution required that all rights granted in mineral resources ought to be ratified by Parliament before the owners could be vested with legal rights.

He further observed that stones were mineral resources and, therefore, it meant that when such rights were granted operators of quarry sites, Parliament ratified them before they could be vested with legal rights.

“There have been instances when quarry operators have sought injunction on individuals who encroached on the 500-metre buffer zones at quarry sites but the courts rather injuncted the quarry sites on grounds that they do not have legal rights because their licences or leases have not been ratified by Parliament,” he said.

The minister further said an initiative had been rolled out by the government, through the Minerals Income Investment Fund (MIIF), to support quarry operations and entrepreneurs in the sector to acquire logistics to boost their operations.

Again, he said, as part of measures to rake in the needed royalties from quarries, an inter-agency taskforce had been formed to perform that special role.

For some years now, the Commercial Quarry Operators Association (COQOA) have been calling on the mandated state agencies to enforce the laws governing the sector to save quarry