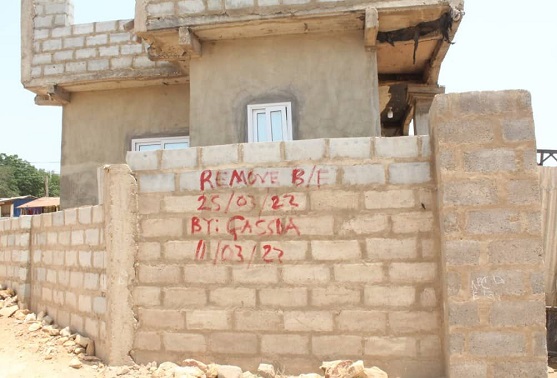 The Greater Accra Second hand Spare parts Dealers Association (GASSDA) with support from the Ga Central Municipal Assembly and the police has given final notice to encroachers on the association’s 72-acre land at Anyaa.

The association has set Friday, March 25, this year as the deadline for the encroachers to evacuate the land.

This is to allow mechanics and spare parts dealers operating at Darkuman Kokompe to relocate to the encroached land located at Anyaa, a suburb within the Ga Central municipality.

The action follows a directive by the Greater Accra Regional Minister, Henry Quartey, to members of the association to relocate from Darkuman Junction, popularly known as ‘Kokompe’ as part of the “Let’s Make Accra Work” initiative.

During a visit to the encroached land last Friday (March 11) to mark structures for demolition, the Chairman of the association, Nii Akwei Bonsu III, said their resettlement was long overdue.

Nii Akwei Bonsu III, speaking to journalists during the exercise

“During the NAM conference in 1980, there was the need to decongest Accra, so the government in its wisdom acquired the land for us around 1988 and went further to put an executive instrument to cover it.

“So since the 1990s, it has been on the drawing board to move from Darkuman junction to the land here and that is why from time to time we have been coming here,” he told journalists.

Nii Bonsu noted that the original size of the land given to them by the government was 85 acres but had lost about 12 acres to encroachers.

One of the officials marking one of the buildings for demolition

He said they observed recently that the remaining 72 acres was also being encroached upon and that compelled them to involve the assembly.

“With the help of the assembly, we have engaged the encroachers on several occasions to inform them to move from the land.

“Today we are marking the structures for demolition, and to allow preparation of the land,” he said.

Nii Akwei Bonsu III noted that their action was necessary as pressure was mounting on them to move from Darkuman Kokompe.

“The government wants to decongest Darkuman junction from where members of the association operate, so all the mechanics and  spare parts dealers will have to move to the Anyaa land and we feel it is in the right direction.

“Today is another day to alert and sensitise those who are encroaching on the land to get off so that construction of the stores to absorb the mechanics and the Spare parts dealers from Darkuman junction to be on these lands,” he said.

The Municipal Chief Executive (MCE) of the Ga Central Municipal Assembly, Mr Mohammed Bashiru, speaking to journalists after the exercise gave assurances that the demolishing exercise would be peaceful.

“People have come to settle on the land for a long time without authorisation from Kokompe leadership, so upon the request of Mr Quartey for the dealers to relocate to this place, the assembly wrote to us and copied the Regional Minister about the encroachment for assistance to evict the people on the land.

He, however, noted that there would be no compensation for the encroachers.