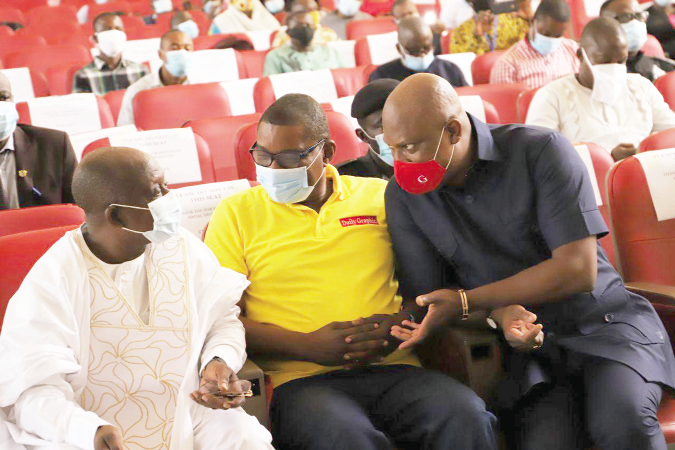 The Ashanti Regional Minister, Mr Simon Osei-Mensah, has said the Daily Graphic has lived up to its mandate as a state-owned media institution by exhibiting fairness and professionalism in its reportage.

He said fair and accurate reportage by the media was necessary to promote peace and oneness, particularly during the electioneering period.

He, therefore, urged the media not to inflame passions but remain factual and fair to all sides.

Mr Osei-Mensah was delivering the keynote address at the launch of the Ashanti Regional Spotlight of the Graphic Communications Group Limited (GCGL) in Kumasi yesterday.

Spring Consult is partnering the GCGL for the Graphic Corporates in Ghana Peace Campaign, while the GCB Bank is the main sponsor of the Regional Spotlight.

The regional minister underscored the importance of peace, which he said was a critical requirement for the development of any country.

According to him, for peace to prevail, wrongdoings or crimes must be treated as such and not viewed from the political, ethnic or religious points of view.

Mr Osei-Mensah said anyone who committed a crime must be made to face the law, as “crime has no political, religious or ethnic colour”.

He urged the security agencies, particularly the police, to treat equally anyone who flouted the laws of the country.

As Chairman of the Ashanti Regional Security Council (REGSEC), Mr Osei-Mensah said he would make sure that fair play remained the catchword.

He said no member of a political party would be shielded from facing the law for committing a crime and advised party faithful not to “go and commit the crime because we are going to deal with everybody according to the laws of the country”.

The regional minister indicated that elections were just contests of ideas and not grounds for conflict.

Consequently, he asked politicians to sell their vision and plans to the electorate, saying “if the people understand you, they will give you their power”.

“Why do you want this country to get into conflict and crisis before you win that power for the people?” he asked.

He advised political parties and politicians to do their best to preach peace and campaign on issues.

Mr Osei-Mensah said peace was a shared responsibility and so everyone had a role to play in ensuring that the elections passed without disturbance.

In his welcome address, the Managing Director of the GCGL, Mr Ato Afful, explained the rationale for the Regional Spotlight, saying it was aimed at projecting the cultural and economic potential of the region, with the view to attracting investors for rapid development.

He said the initiative started in July 2019, with the Ashanti Region being the sixth region to be covered.

According to him, the Ashanti Region should have had its turn long ago but the coronavirus disease (COVID-19), with its restrictions, led to the rescheduling of the programme.

He said the region was endowed with lots of tourist attractions that one could not ignore and cited the Lake Bosomtwe, the Rattray Park, the Kumasi Zoo and the Manhyia Palace and Museum as examples.

Mr Afful said the region had enormous business opportunities which could be promoted to attract the necessary investment for development and appealed to stakeholders in the region to take advantage of the opportunity of the spotlight to showcase their potential and attract the needed investment to develop the region and their communities.

The Chairman for the occasion, the Omanhene of Asante Akim Domeabra, Baffuor Owusu Bediako, who represented the Asantehene, Otumfuo Osei Tutu II, commended the GCGL for bringing the idea of the Regional Spotlight to the region.

As the most populous region, he said, Ashanti was known for its wealth and culture, tradition and natural resources such as gold.

He expressed optimism that the initiative would put tourism in the region in the spotlight and boost the arts and culture industry.

The Chief Executive Officer of the Kessben Group of Companies, Mr Stephen Boateng, better known as Kwabena Kesse, said he was optimistic that the GCGL initiative would go a long way to drive businesses and also promote the development of the region.

The Kessben Group is the GCGL’s key partner in the Ashanti, Bono, Bono East and Ahafo regions.

Mr Boateng pledged his company’s support to the partnership and also its readiness to lend a helping hand to ensure that the GCGL realised its objectives.

“The hours spent here have been for a just cause,” he said.

Commenting on the partnership with the GCGL, he said: “So far, so good.”

“Let me say that it has been good. They have given a helping hand and we want to say that in the coming years, we are going to do more than has been realised. All is good,” he added.