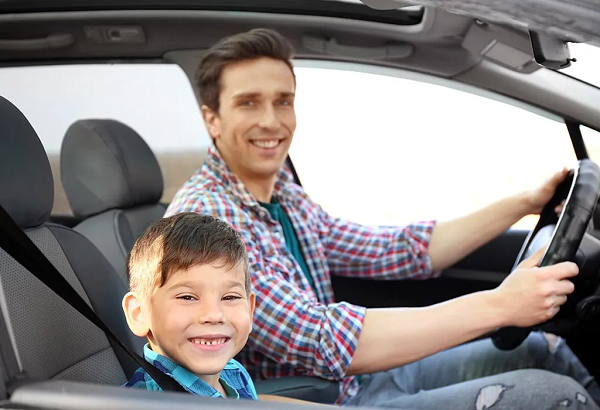 The Programme Manager of Newborn and Child Health at the Ghana Health Service, Dr Edward Antwi, has advised adults against placing children in the front seats of their vehicles while driving.

The best place for the child in the car, he explained, was the back seat where they should also be properly strapped with the seat belt.

Section 14 (1) of the Road Traffic Act, 2004 (ACT 683) on carrying of children in motor vehicles, among others, states that “a person who drives a motor vehicle on a road when a child of five years or under five years is in the front seat of the motor vehicle commits an offence and is liable on summary conviction to a fine not exceeding 100 penalty units or to imprisonment for a term not exceeding six months or to both.”

Section 14 (2) of the Act says, “a person who drives a motor vehicle on a road, when a child between the ages of five and 18 years who is sitting on the front seat of the vehicle is not wearing a seat belt commits an offence and is liable on summary conviction to a fined not exceeding 100 penalty units or to a term of imprisonment not exceeding six months or to both.

Section 14 (3) says ‘a person commits an offence if that person drives a motor vehicle on a road when: (a) a child under the age of 18 years in the rear of the motor vehicle; and (b) the child is not wearing the seat belt.

Why children should not sit at front seat

Dr Antwi, who was speaking in an interview, explained that when children were placed in the front seat of vehicles or at the back seat where they were not properly secured in seat belts, should there be a sudden stop or a brake was applied, that child could easily hit himself or herself against the windscreen and sustain injuries.

“Lately, you find people driving and the children are in the front seat, with some not even in seat belts. Some are also found standing at the back seat of a moving car. If there is a sudden stop, it is likely to throw such children forward and this can cause injuries.

“So it is best for the child to be at the back seat strapped in seat belt and the windows closed so that they do not have the opportunity to put their heads or hands out while the vehicle is moving,” he advised.

Mr Antwi said most adults did not know the dangers and many other things that occur at home posed to the safety of children and it was for that reason that this year’s “Child Health Promotion Week,” which started from last Monday, May 9 to 13, was focussing on creating awareness of child safety and security.

What is Child Health Promotion Week

The Child Health Promotion Week is a week set aside by the GHS to promote child health. As part of the celebration, there are vaccination exercises and talks on the theme in various health facilities in the country.

This year, aside from the vaccination, there will be counselling on nutrition, growth promotion, otherwise known as weighing; promotion of insecticide treated nets and deworming exercises in some areas.

Mr Mr Antwi pointed out that equally not safe was for adults to place children on their laps and sit on the front seat of moving vehicles, explaining that in case of any sudden stop or
collision, the impact could throw the child off the lap of the adult to hit the dashboard or the windscreen.

“Some children have been thrown out of vehicles through this so the front seat is not a place for children. If there are older children or adults in the vehicle, the child should be seated in between them at the back seat,” he advised.