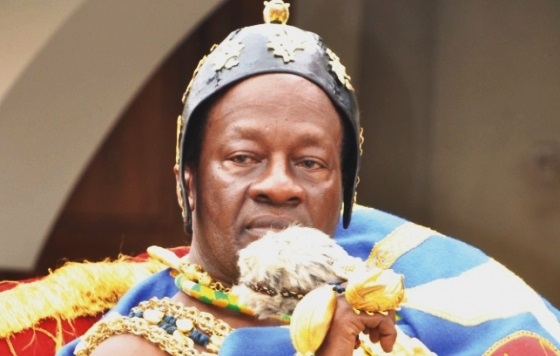 Trading activities in the New Juaben Traditional Area have been banned from Friday May 13 to Monday May 16 as part of preparations towards the burial of the Omanhene, Daasebre Professor (Emeritus) Oti Boateng, and the Queenmother, Nana Yaa Daani II.

The ban affects all stores, stalls and markets except drug stores and pharmacies, food vendors and clinics, which have been classified as very essential.

Drinking bars will operate but will not be allowed to make noise on their premises in line with the ban on drumming and noise making which has been in force since April 18, this year to end on May 18, this year.

The two royals will be laid to rest on Monday.

The Gyaasehene of New Juaben Traditional Area, Nana Twumasi Dankwa, who is the Chairman of the Funeral Planning Committee, disclosed this to the Daily Graphic, yesterday.

He warned that security detail from the Yiadom-Hwedie Palace, traditionally referred to as ‘abrafoo’ to wit ‘executioners’ would be going round to enforce the bans.

The Gyaasehene said items and goods of defaulters would be confiscated and therefore urged the people of the New Juaben Traditional Area, which is essentially the Eastern Regional capital, Koforidua, and its environs, to cooperate with Juabenman to give the two illustrious traditional rulers a fitting funeral.

Nana Dankwa said the period between Saturday and Monday had been declared as Doteyie in line with Asante custom, to be used to observe all the burial and funeral rites.

Huge portraits of the late Omanhene and the queenmother on giant billboards have been erected at vantage points of Koforidua, the traditional seat of New Juaben.

The back of the Yiadom-Hwedie Palace has been prepared as the venue for the burial and funeral service.

The venue and the forecourt of the palace have been cleaned and asphalted to accommodate the large number of people who will throng Koforidua for the burial and funeral rites.

A visit to the venue by the Daily Graphic indicated that canopies and seats had started arriving to be fixed and arranged for the funeral.
Trees and poles in Koforidua and its environs have been partly draped in black and red cloth.

Nana Dankwa said numerous mourners from all parts of the country, especially Juaben, near Ejisu in the Ashanti Region, where the people of New Juaben migrated from, would be in Koforidua in their numbers to pay their last respects to the two royals.

The President, Nana Addo Dankwa Akufo-Addo, will lead a government delegation to attend the funeral, which will have other politicians, as well as diplomats and other dignitaries, in attendance on Saturday.

Also expected, Nana Dankwa stated, would be Asantes and other indigenes from the diaspora.

On Sunday, religious bodies, the Eastern Region House of Chiefs, chiefs, Commonwealth Hall Old Students (Old Vandals), Freemasons and the general public will be expected to pay their last respects.

The Funeral Planning Committee chairman added that the Asantehene, Otumfuo Osei Tutu II, and other chiefs from the Ashanti Region would be spearheading the burial of the two royals on Monday.

The Juabenhene and Chairman of the Council of State, Nana Otuo Siriboe, who is a younger brother of Daasebre Oti Boateng, has been presiding over the funeral arrangements.
With regard to the final funeral rites for the departed traditional rulers, the Gyasehene indicated that it could only be performed by a new Omanhene who would be enstooled.

Some residents of Koforidua who shared their expectations with the Daily Graphic said they expected a fitting funeral for the two traditional rulers.

A trader, Akosua Larbi, and a dressmaker, Fuseini Zakari, were anxious of witnessing the funeral rites.

They described the late Omanhene and the queenmother as great leaders who did a lot for the people of New Juaben, particularly in the area of development.

Daasebre Oti Boateng passed away on August 10, last year, while Nana Yaa Daani died a couple of months ago.