Be true ambassadors of Christ - Chief of Staff urges Christians 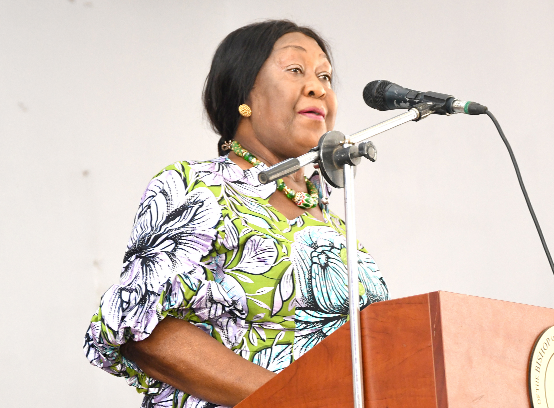 The Chief of Staff of the Office at the Presidency, Akosua Frema Osei-Opare, has called on Christians to be true ambassadors of Christ by showcasing the virtues of diligence and faithfulness.

In addition, she said, they should exhibit honesty, selflessness and sacrifice wherever they found themselves.

Mrs Osei-Opare said that in an address read on her behalf at the opening of the Second Quadrennial Regional Women's Home and Overseas Missionary Society Convention of the African Methodist Episcopal (AME) Zion Church in Accra yesterday.

The five-day convention is on the theme: “Empowering Women for Missions with Love”.

The event aims at exploring ways that missionary ladies of the church could better equip themselves individually and collectively to effectively reach out to the masses with the gospel.

It is also to explore ways and opportunities to undertake their divine responsibilities of feeding the hungry, clothing the naked, visiting prisoners, teaching the ignorant, sheltering the homeless, among others.

Mrs Osei-Opare acknowledged the high premium placed on education by the AME Zion Church, adding that it was born out of her belief that knowledge, skills and competencies gained from education were prerequisite for any nation to achieve meaningful and sustainable development.

“The church thus deserves special commendation for the progress made in the area of primary and secondary education. You have established to your credit over 641 basic schools and four senior high schools,” she said.

She also made mention of vocational institutions set up by the church and said: “This investment in human capital through education has not been without impact”.

Moreover, the Chief of Staff said the church had produced men and women of character and exceptional qualities who had carved a niche for themselves in both the public and private sectors of the country and beyond.

Aside from education, she said, the church also contributed in the area of health.

Also in an address, the Missionary Supervisor of the AME Zion Church, Cynthia Serwaa Dogbe, said members should pursue opportunities of using modern trends and technology in pursuing their missionary agenda for the glory of God.

“Let us embrace opportunities for change and learn new ways of doing things and empower our people as we strive to fulfil the great commission,” she said.

“I can readily recall the school supplies project undertaken by missionaries and through which we have supplied exercise books, pens, mathematical sets, school uniforms and desks to students in our basic schools in the episcopal area. Missionaries have undertaken visits to the aged, sick and the shut-ins with their donations,” she said, and added that “in similar fashion, they have visited orphanages and hospitals, particularly, maternity units to make donations and also encourage persons there with the word of God”.

“So far, three females and one male student in the Ghana Conferences, and also our female students seminarians at the Trinity Theological Seminary in Ghana have benefited and we hope to extend this grant to other conferences. I must acknowledge that our missionaries in the Ghana conferences have also continued with the annual food and other material support for our seminary students” she said.

The Presiding Bishop of the WWAED of the AME Zion Church, Rt Rev. Dr Hilliard Dogbe, said, among other things, that God had kept faith with the church.