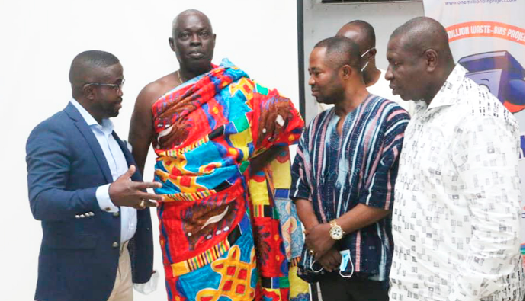 The Paramount Chief of the Mpohor Traditional Area, Osabarima Kwaw Entsie II, has condemned the relaxed attitude of law enforcers towards the enforcement of bye-laws on sanitation which makes indiscriminate disposal of waste easy.

Speaking at the Graphic-Zoomlion Clean-up campaign in the Western Region, he said it was an embarrassment to drive or walk by the mess “we have created as if everything is alright”.

He said it was sad that people had refused to be responsible for the waste they generated either from domestic or commercial activities.

Osabarima Entsie II said the time had come for various metropolitan, municipal, district assemblies and the sector ministries to apply the law to the letter to prosecute polluters, parents who sent minors to communal dumpsites and those minors who just threw the waste on the ground and returned home.

He said persecution without fear or favour would serve as a deterrent and ensure a clean environment, without which the fight would be difficult.

“Arrest, shame the polluters and apply the full sanctions to ensure that we free the environment from indiscriminate dumping. We have waste management systems in place but the bigger solution is the attitude of the people which will only change with full application of the law, ” he added.

Nana Entsie II called for the re-introduction of Communal Labour which should be compelling by engaging all stakeholders to clean various communities as it used to be some years back – “the days of “Sama-Sama” where people respected the rules should be brought back.”

With plastic being the main component of waste generated in the country, he suggested that all companies which had something to do with plastic — manufacturing of bottle products and plastic bags— should be levied to help in the management of the waste that was generated from their products.

On the issue of open defecation in the coastal areas, the paramount chief suggested to the assemblies to help provide households in the slums with toilet facilities to curb the unhygienic practice.

The Western Regional Minister, Mr. Kwabena Okyere Darko-Mensah, said the region was grateful to be part of this roadshow and “I commend Graphic Communications Group and Zoomlion Cluster of Companies for spearheading this agenda of clean Ghana.”

“Today, we have gathered to prosecute the agenda “KeepGhanaClean”, which indisputably is an old phrase we are all familiar with. The caption has featured several times in most sanitation campaigns initiated by successive governments, corporate agencies and organisations,” he said.

Mr. Darko-Mensah, who is also the Member of Parliament for Takoradi, said over the years, sanitation issues in the country had been a serious canker to deal with. “The multitude of environmental sanitation challenges in the country is alarming, and well acknowledged by all,” he stressed.

The Editor of the Daily Graphic, Mr. Kobby Asmah, in a speech read on his behalf by the Assistant Editor of the Graphic Business, Mr. Charles B. Okine, said as part of the company’s strategy to be more impactful as a business, “we have earmarked this year to drive awareness and education on improved sanitation nationwide, hence the Make Ghana Clean Campaign.”

He said on April 28, this year, the Graphic Communications Group Limited's National Sanitation Awareness Campaign was launched in Accra, with a call for the strict enforcement of sanitation bye-laws and the naming and shaming of people who flout the laws. Since then, the company has been to the Ashanti, Volta, Eastern, Oti, Ahafo, Bono and Bono East regions.

He said as a country, one of the major causes of poor sanitation was the improper disposal of waste. “People dispose of waste materials indiscriminately, which, after any downpour, get our drains choked and eventually lead to flooding.”

Mr. Asmah said there was no doubt that the region held enormous prospects – the region blessed with rich agricultural resources. “Therefore, it is one of the food baskets of the country and also provides a huge investment potential with global standard mineral resources and the addition of black gold, he added.

Mr. Asmah said the whole goal was to complement the national sanitation campaign efforts and for citizens to play their part in cleaning the environment. Having declared 2021 the “Year of Sanitation”, we are focusing on efforts to whip up the citizenry to adhere to good sanitation habits and practices.”

“We at Graphic will continue to lead in the campaign to get the entire country clean. In so doing, we are committed to complementing efforts by the various assemblies to get the country clean,” he emphasised.