Akode women urged to use internet facility for development 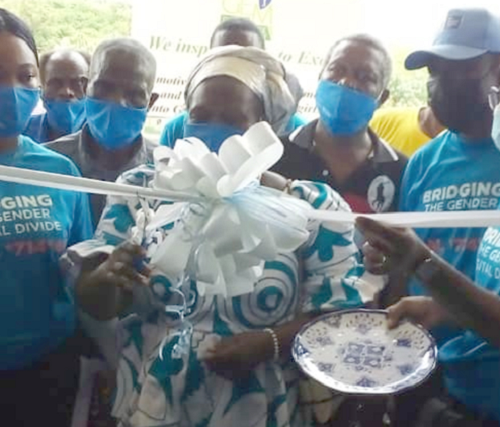 Madam Beauty Fiagbenu (middle), Chairperson for the programme, cutting the tape to inaugurate the project at Akode

BLUE TOWN WI-FI, a Telecommunication Service Provider, in collaboration with Hunger Project, has provided an internet service to the Akode community in the Okere District in the Eastern Region to promote their economic activities.

The project on the theme: ‘‘Connecting the unconnected’’, is sponsored by USAID and Digital Frontiers.

It is women focused and targets women from 15 to 34 years to have meaningful access to internet services, bridge the gender digital divide, develop digital skills to earn income through education, job training and entrepreneurship.

The project will also enable the beneficiary communities to access free training material and other content on BLUETOWN Local Cloud and enjoy information on entertainment, news, health, education and many others.

Currently, the project is being implemented in Akode in the Okere District, Addonkwata in the Abuakwa South Municipality and Supreso in the Suhum Municipality all in the Eastern Region.

At the launch of the Akode Project, the Country Director of Hunger Project, Mr Samuel Afrane, said due to unavailability of internet connectivity to rural areas, most of them had been cut off from the national communication grid.

‘’Anytime Hunger Project identifies a community like that, we liaise with BLUE TOWN WI-FI because they have the infrastructure and together we do the setting up of the equipment for the identified community,’ Mr Afrane said.

He said one of the major activities of the Hunger Project in connection with the internet connection was to set up an ICT Centre, train the people to man the facility so that the beneficiary communities could visit the centre and use the facility for their development.

He said Hunger Project had trained officers, who had become permanent staff to be with the people to serve as their teachers at the facility to ensure they understood what they would be learning, aimed at improving their livelihoods.

He explained further that there were a lot of things on the internet but because of inaccessibility by many people, especially the rural folks, they lagged behind.

‘’I want to encourage you here at Akode to make use of the facility because there are a lot of information on the internet that will help you learn and improve your lives because knowledge is power,’’ he added.

A 25-year-old member of the Akode community, Ms Angela Mawutor Mensah, who spoke to the Daily Graphic in an interview, commended Hunger Project and the allies for the facility, which, she said, was going to benefit the youth, especially, since there had never been any ICT laboratory in and around the Akode community.