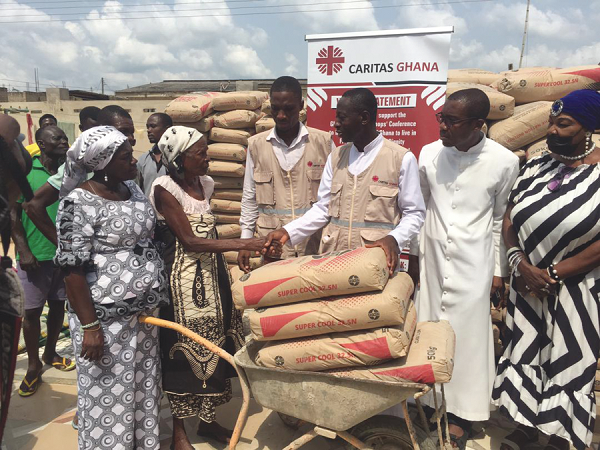 It was all smiles in the community of Abii in the Komenda Edina Eguafo Abrem municipality, when residents whose homes were pulled down by flood waters received bags of cement to support the reconstruction of their homes.

Caritas, the charitable wing of the Catholic Archdiocese of Cape Coast in the Central Region, presented bags of cement to support the rebuilding of the community.

The June 2022 floods came heavy on many communities in the Central Region and the Abii community was one of the settlements that were hardest hit.

Many in the community had their houses tumbling down, displacing many.

The affected were kept in facilities at community centres and others with families in the community as well as other habitations.

Maame Abena Ampomah, 95, called the place home and had stayed there all her life. But her residence was pulled down by the community because it had become a death trap after the floods and she was relocated to stay with her daughter.

At the ceremony, Maame Ampomah received six bags of cement to start the reconstruction of the building she knew as home for decades.

“I love my home and want the Lord to pick me from that home. I want to die in this my home and I want it rebuilt for me and I thank the Catholic Church for this donation. More should come from where this came,” she said.

Her daughter, Theresa Kakraba, said it was a push-start that would help them begin the rebuilding of her mother’s home. You know old folks and how they love to be in their own home,” she added. 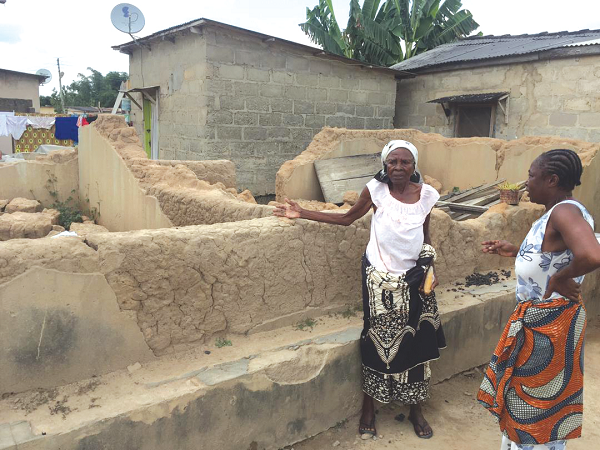 Another resident, Efua Ano, relocated to the Esuekyir community to be with her child and her husband, but now says she would rebuild her home and come back to stay in the community.

“I lived in my own house but had to relocate because the floods brought down my house. There are a lot of inconveniences where I am now. I will rebuild and come back home,” she stated.

The Director of Caritas who is also in-charge of Socio-Economic Development at the Catholic Archdiocese of Cape Coast, Very Rev. Father Stephen Amoah-Gyasi, said Christmas was a period to shed abroad the love of Christ to all and it was a perfect time to help the people of Abii to rebuild their homes.

He said the Catholic Church through Caritas had undertaken support projects to improve the well-being of many communities and would continue to work to better the lot of vulnerable communities.

He said the Caritas secretariat would work towards ensuring more support to ensure the affected persons had their homes completed.

He urged Ghanaians to support each other through the difficult economic challenges.

He called on other benevolent organisations to come to the aid of the community, to help rebuild their homes.

He also presented food items to the Ankaful Prisons.