320 Illegal structures to go down in Ledzokuku municipality 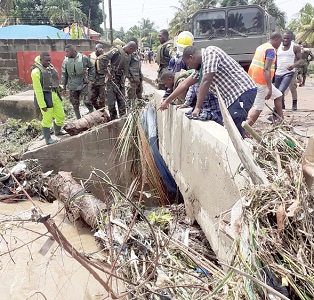 Debris being cleared from the ‘Busy Mouth bridge’ at the Cocoa Road, Teshie-Nungua Estate. Follow @Graphicgh

The Ledzokuku Municipal Assembly is to demolish 320 illegal structures, including those on watercourses that often lead to flooding anytime it rains.

Apart from ensuring an orderly development of the municipality, the exercise will also make way for the free flow of water, especially during the raining season.

According to the Chief Executive Officer of the municipality, Mordecai Quarshie, “in all, we plan to demolish about 320 illegal structures”.

He said the exercise, which was supposed to have started yesterday, had to be postponed due to the downpour earlier in the morning.

Mr Quarshie said a new date would be fixed by the assembly for the demolition exercise, adding “it is an interim measure. Breaking structures is not difficult, but the main issue is about excavating”. 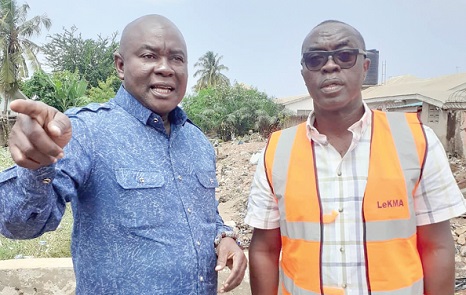 “The long-term solution is the dredging of the Songhor Lagoon, and the evacuation and restoration of the original floodplain,” he said.

Some houses along the Cocoa Road at the Teshie-Nungua Estate were inundated, destroying household items because of the blockage of the ‘Busy Mouth bridge’ along the road.

It took the intervention of residents, including officials of the Ledzokuku Municipal Assembly, led by Mordecai Quarshie; a team from the 48 Engineers Regiment, the Ghana National Fire Service, the Police Service and NADMO, to clear tree stumps and other debris from under the bridge to allow for the free flow of water.

Some affected residents expressed concerns about the inability of the assembly to find a permanent solution to the perennial flooding of their homes.

Emmanuel Quaye, 36, claimed that his room was flooded and his property destroyed during the rain.

Another resident, Faustina Nelson, 46, called for the construction of more drains while existing ones were widened to carry large volumes of water when it rains.

Some motorists also entreated management of the assembly to fix the deplorable roads in the area, especially the Cocoa Road which is riddled with potholes.

The situation of the road which has seen an increase in the number of motorists who use the stretch due to work on the main Teshie-Nungua road has further deteriorated following the onset of rains this years.