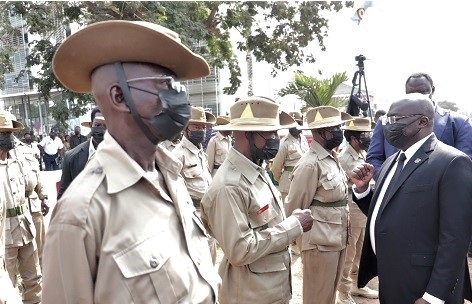 Vice-President Dr Mahamudu Bawumia exchanging pleasantries with some of the Veterans after the ceremony in Accra. Picture: SAMUEL TEI ADANO Follow @Graphicgh

A wreath-laying and flag-raising ceremony was held at the Nationalism Park in Osu in Accra yesterday to mark the 28th February, 1948 Christianborg Crossroads shooting incident.

The ceremony, the 74th edition, was in remembrance of the landmark incident which provoked a major strike and a call for an end to colonial rule, sparking the struggle for independence at the time.

The Vice-President, Dr Mahamudu Bawumia, who graced the occasion, laid one of the five wreaths on behalf of the government and the people of Ghana, while the Chief of the Defence Staff, Vice-Admiral Seth Amoama, laid another on behalf of the security services.

The ceremony, which is held every year in honour of three ex-servicemen who were shot while on a peaceful march to the Christianborg Castle at Osu on February 28, 1948, was witnessed by traditional rulers, security personnel, veterans, relatives of the three fallen heroes, the clergy, students and pupils from selected basic and second-cycle schools, as well as government officials.

Also in attendance was a contingent of the Ghana Armed Forces and the police, while the Police Band provided some soothing songs.

History has it that a number of ex-servicemen, on February 28, 1948, marched to the Christianborg Castle to present a petition to the then Governor, Sir Gerald Creasy, over their unpaid war allowances.

The ex-soldiers were, however, intercepted at the Castle intersection by a contingent of armed policemen, led by a British Police Superintendent, Mr Colin Imray, who ordered that they disperse.

When the ex-servicemen were adamant, Supt Imray ordered the police to open fire, leading to the death of the three ex-servicemen.

The ex-soldiers had fought alongside the allied forces in the Gold Coast Regiment of the Royal West African Frontier Force during the Second World War and had returned home, but they were not paid their gratuity.

After several appeals to the colonial government to consider their plight had failed, the ex-servicemen decided to march directly to the British colonial governor at the Castle to present their petition.

The three fallen heroes were Sergeant Adjetey, Corporal Attipoe and Private Odartey Lamptey, all members of the then Gold Coast Regiment of the Royal West African Frontier Force.