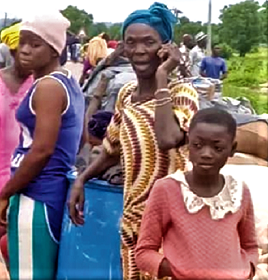 Some victims standing by their belongings on the road
30.5k Shares

Two communities in the West Mamprusi municipality in the North East Region have been submerged following a heavy rainfall in the area last Sunday.

A number of houses, farmlands, livestock and valuable items have all been washed away by the flood waters.

Also, the main road linking Walewale and Nalerigu have become inaccessible after a trench was dug across the road to allow for the free flow of water in order that it did not spread to adjoining communities.

Residents of the affected communities, Gaagbini and Banawa, who have been rendered homeless in the process have, therefore, appealed for support to assuage their plight.

Checks by the Daily Graphic indicate that some of the victims have packed what they could salvage from the floods on the main Walewale-Nalerigu road where some of them passed the night, with others putting up with relatives.

Some of the victims said they had lost all their belongings, including foodstuffs, to the floods.

"We woke up on Sunday to see the entire community flooded. Now we have no place to go," Sakina Alhassan, a resident, said.

The victims appealed to the municipal assembly, individuals and organisations to go to their aid, as many of them had had their properties destroyed.

The Chief of Gaagbini, Naa Yidana Alhassan, who has also been displaced by the disaster, called for the construction of a bridge in the area to ensure the free flow of water. 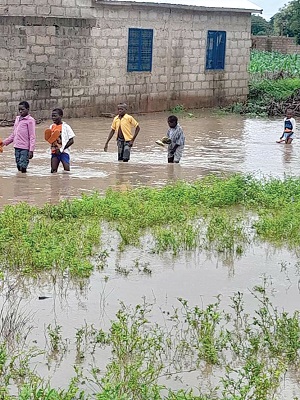 "Over the last two years, flooding has been occurring, so I am begging the government to construct a big culvert in the community.

“Now the community gets flooded whenever it rains because the reconstructed road was raised and the culvert is also shallow and not able to contain the volume of water when it rains," he said.

An earth-moving machine was sent in to create a temporary channel across the road to allow for the free flow of water to de-escalate the situation.

Engineers of the North East Regional Office of the Ghana Highway Authority were subsequently directed to conduct a technical assessment of the area to find a permanent solution to the annual ritual of flooding along that portion of the road.

In 2020, nearly 700 residents of some communities in West Mamprusi were displaced after a heavy downpour in the area.