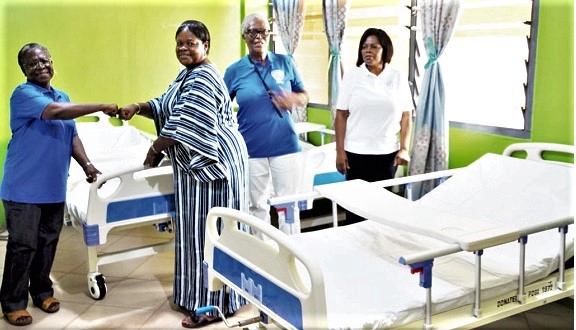 Mrs Afeti (left) handing the refurbished clinic to Madam Coffie, while two members of the POGA'72 look on Follow @Graphicgh

Members of the 1972 year-group of the Past OLA Girls Association (POGA’72) have refurbished the school infirmary at the cost of GH¢30,000.

The donation coincided with the 50th anniversary of the year group.

The facility, which now has six admission beds, is also stocked with various medications.

The infirmary was handed over to the school authorities at a short ceremony on campus in Ho at the weekend.

“We are only giving back to OLA, Ho, a little of what she has given us,” the Coordinator of Affairs of POGA ’72, Madam Paula Jiagge, said.

She gave an assurance that members of the year group would continue to attend to the needs of their alma mater, and urged the students to comply with the rules and regulations of the school at all times.

“We hope you will not feign illness just to spend time at the infirmary,” she added.

A former headmistress of the school and member of the group, Mrs Philomena Afeti, who formally handed the facility over to the school, entreated the students to avoid premarital sex and study smoothly to become gems for the nation.

The Headmistress, Madam Regina Coffie, expressed gratitude to POGA’72 for the support and said that the new infirmary would definitely be put to good use.

“You have exhibited your love for OLA, Ho in very practical terms and we are very happy about that,” she added.

The Head Girl (School Prefect), Miss Jessica Ewoenam Ababio, also expressed gratitude to the year group for the gesture, saying the love demonstrated to the school by the group was overwhelming.