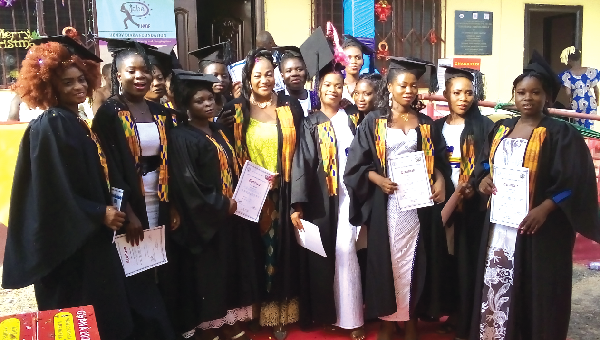 Thirteen female apprentices have graduated from the Henry Djaba Memorial Centre for Ideas and Knowledge (HDMIK) at Somanya in the Yilo Krobo Municipality after one year of apprenticeship.

The first batch of the 13 graduates scored 100 per cent in the National, Vocational and Technical Institute (NVTI) examination they sat in June, 2021, with Ms Stella Nanor, who learnt beads and jewellery making, emerging as the overall best graduate.

The graduates were presented with sewing machines and other working tools according to their trades to start work immediately.

The Executive Director for Henry Djaba Memorial Foundation (HDMF), Ms Otiko Afisah Djaba, who presented the items to the graduates, entreated them to go and practise what they had learnt and be fruitful to themselves and society at large.

She was worried about the rate of teenage pregnancies recorded in the area and its attendant physical, health and economic challenges.

Ms Djaba, a former Minister of Gender, Children and Social Protection (MoGCSP), therefore, asked them to be role models in their various communities so that others would emulate their shining examples when they started work.

‘’It does not matter where you come from; what matters most is your dream of becoming what you intended doing. You are role models in your community in the Krobo land. Let the youth see you as such’’, Ms Djaba emphasised.

She said as they finished their apprenticeship, some of them would become teachers and others entrepreneurs in the future and urged them to sell the HDMF to the outside world and the Krobo community in particular for others to also come and benefit from it.

‘’All that we are asking of you is to be proud, intelligent, wonderful, bold, courageous and above all very confident in whatever you would be doing out there. The training you have and the graduation are just a new beginning and so go and shine in order to achieve your dream,’’ she stated.

The Administrator of the centre, Mr Aaron Laary Lambon Tapang, was full of praise for the seriousness the graduates attached to the learning of the employable skills they had acquired.

Mr Tapang thanked the instructors in particular and all other stakeholders for the various roles they had played since the centre started in 2020.

He, however, appealed to the Department of Social Welfare and Community Development to assist the centre with training and learning materials to enable it to enrol more learners in the area.