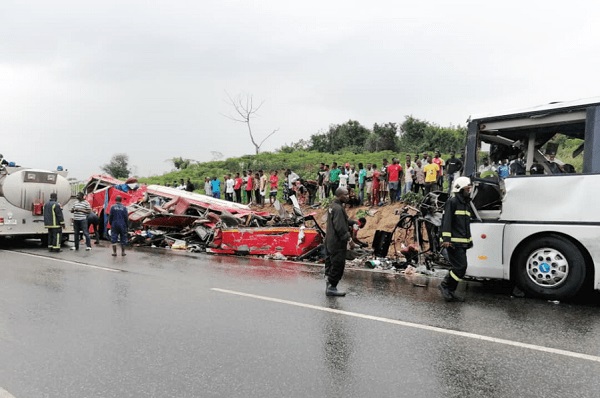 The Director-General of the National Road Safety Authority (NRSA), Mrs May Obiri-Yeboah, has tasked political parties to include road safety measures in their campaign messages and activities to help reduce accidents, especially in the lead up to the December elections.

She said the statistical trend shows a rise in road crashes and casualties, including deaths, in the years 2000, 2004, 2008, and 2012, which were all years when general elections were held in the country under the 1992 Constitution.

According to her, statistics indicated that election years were more susceptible to road accidents due to increased political activities.

Mrs Obiri-Yeboah was speaking at a road safety dialogue organised by the NRSA in Accra yesterday, where the authority engaged political parties on ways to reduce road accidents during campaign seasons.

There were eight political parties at the dialogue, including the National Democratic Congress (NDC), the Ghana Union Movement (GUM), the Convention People’s Party (CPP), the Progressive People’s Party (PPP), the Ghana Freedom Party (GFP) and the Liberal Party of Ghana (LPG).

The NRSA, established by the National Road Safety Act, 2019 (Act 993), is the lead public statutory body responsible for road safety in Ghana.

Currently, the authority is implementing the National Road Safety Strategy Three to stabilise and reduce road traffic related casualties by 50 per cent by the year 2020.

A trend analysis of the figures over the past 28 years has shown that all election years recorded higher road crashes and fatalities than the preceding years, with the exception of 2016.

Those statistics indicate a steady increase in the road accident situation, compared with the same period of 2019 which recorded 10,294 crashes, 10,721 injuries and 1,733 deaths.

Also, the 2020 figures show that road crashes had increased over the 2016 election year when 8,651 crashes occurred.

In 1992 when the country returned to democratic rule and had elections in December 7, the number of crashes was 6,922, which resulted in 10,030 casualties and 914 deaths.

As part of the dialogue, the NRSA has sensitised the participants to the road safety code for political parties it has prepared.

They were also made to sign an agreement to affirm their commitment to ensure safety on the roads and also champion road safety campaigns.

The six-point road safety code touches on more than 50 dos and donts for political parties who would be criss-crossing the country, campaigning for the mandate of the electorate.

It advises the political parties to appoint road safety champions to monitor the parties’ campaign and rally programmes to ensure compliance with all the codes.

It also advises them to plan their trips to cover the route, travel time and speed, with stops and rest times; the appointment of competent drivers who must observe defensive driving techniques, as well as ensuring that the vehicles are roadworthy.

Mrs Obiri-Yeboah said the road safety code had been reviewed to make it more relevant to the season.

“We are in a political season and, therefore, have reviewed the code of conduct for political parties and their followers to ensure a reduction in road crashes during this period.

“We are not blaming political parties as being the cause of road crashes; we only want them to support us by championing road safety campaigns,” she added.

The Director of Planning and Programmes at the NRSA, Mr David Adonteng, also entreated politicians to plan their journeys, reduce speed and obey road traffic regulations as they traversed the country to campaign.

Additionally, he urged them to choose competent and responsible drivers who were mature and trained and possessed valid drivering licences.

“You must brief drivers on the journey, routes, travel speed and setting off time. You must also ensure your drivers are screened to ascertain their health, state of mind, suitability and physical preparedness to travel,” he said.

Mr Adonteng further asked political parties to ensure that their campaign billboards were designed in line with approved standards, adding that they must desist from posting their campaign materials on road signposts.