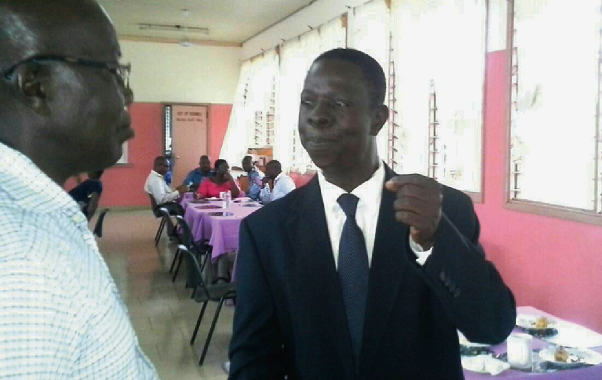 Professor Jemmy Takrama (right) explaining a point to a participant.

According to him, the time had come for the nation to make room for better food policies and to remove barriers that prevented adequate food production and accessibility to nutritious foods.

At the second National Sanitation, Food Hygiene and Safety conference at the Ho Technical University last Thursday, Prof. Takrama said there had been a lot of misconceptions about GM foods because people did not understand what it was all about and only saw it as a ‘bad idea’ because it might have some health implications.

Although Ghana has signed the National Bio-Safety Bill which will allow the importation and planting of GM plants, Parliament has suspended giving it legal backing so that more consultations would be done.

However, Prof. Takrama said there was nothing to fear as the country would rather benefit from choosing that path.

“Genetically modified food technology is a new production tool to produce more food,” he defined and added that “it is just like giving medicine to a plant. It has no side effects.”

He explained that the technology only prevented diseases from attacking the plants and made them grow better than the organic food but did not carry any health implications as had been speculated.

The Millennium Development Goal (MDG) assessment classifies Ghana as a moderately hungry country in the sense that a number of people are unable to feed themselves and, therefore “it has to adopt modern food safety systems with scientific approval to address its food safety challenge.”

“Countries such as the US, Australia, Egypt, Sudan, Burkina Faso, South Africa and those in Europe have accepted this technology. GM crops should also be accepted in Ghana to contribute to food increase and higher food availability,” he stressed.

The two-day conference was organised by the Faculty of Applied Sciences and Technology of the university in collaboration with Zoomlion Ghana Limited on the theme: “The status, current practices and policy options for enhancing sanitation, food hygiene and safety in Africa.”

The conference was used to create a platform for researchers and experts to share research findings on modern issues in the areas of sanitation and food hygiene to be adopted by government agencies for implementation to promote the socio-economic development and welfare of the country.

The Rector of the Technical University, Professor Emmanuel Kojo Sakyi, added that the country could not continue to manage its food resources following the old systems because “it will get to a time things will get out of hand and we will not be able get solutions.”

He called for government agencies to partner academics in finding solutions to problems associated with food safety and hygiene.