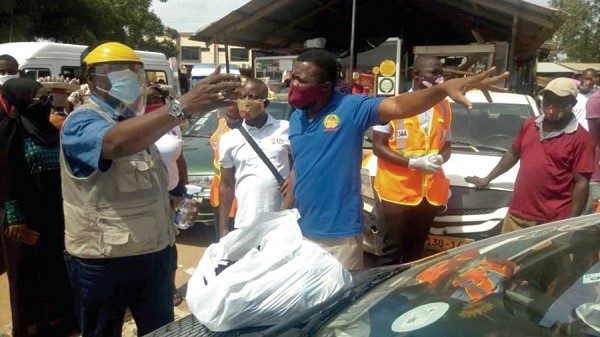 The Ga West Municipal Assembly (GWMA) has begun imposing fines on persons within the area who flout the directive on the wearing of nose masks in public.

This follows the amendment of the bye-laws of the assembly to increase the fine for minor offences from GH¢5 to GH¢20.

The Municipal Chief Executive, Mr Clement Nii Lamptey Wilkinson, told the Daily Graphic that the assembly began the exercise after amending its bye-laws, undertaking several weeks of sensitisation and distributing 10,000 nose masks to residents of all the 17 electoral areas in the municipality.

He said the assembly had deployed a joint security task force to the commercial business areas of the municipality to ensure the residents adhere to the directive.

Over the weekend, about 10 people were arrested by the task force and were taken to the police station where they were made to pay the fine. In addition to that, they were immediately made to purchase a nose mask before they were released.

Mr Wilkinson said although the intention was for people to be encouraged to go by the directive, the assembly realised that appealing to and encouraging people to wear the masks had not been effective, hence the decision to fine them to serve as a deterrent.

“In the bye-laws, the spot fine for minor offences was GH¢5 but that was not deterrent enough so we amended it to get the needed impact. The idea is not to punish people but to get them to do the right thing as many more people would be obliged to wear it than pay the fine,” the Chief Executive explained.

He further indicated that before the implementation of the fine, the assembly had distributed 7,000 nose masks to traders in the municipality and undertaken educational campaigns to educate traders and residents on the need to adhere to the safety protocols.

In addition, he said an extra 23,000 nose masks were also being organised for distribution to residents in the municipality.

He entreated those who received the nose masks to put them to good use as the municipality stepped up efforts to curb the spread of the virus.

Mr Wilkinson admitted that while it was relatively easier to enforce the safety protocols within the business district, the challenge was getting people to observe them in their individual homes, particularly, with social distancing.

“Within the business district, interventions such as the spot fines, the provision of water at vantage points for people to frequently wash their hands, as well as using the park near the police station as a satellite market will help us enforce the directives with the help of the task force.

“However, the issue with the social distancing, particularly, in our villages remains our challenge. Although a lot of sensitisation programmes have been put into operation, those in the villages are failing to comply. Most of their homes are compound houses and they are used to being together,” Mr Wilkinson stressed.

He further appealed to the various opinion leaders and chiefs in the villages to support the assembly to ensure the fight is won against the pandemic.