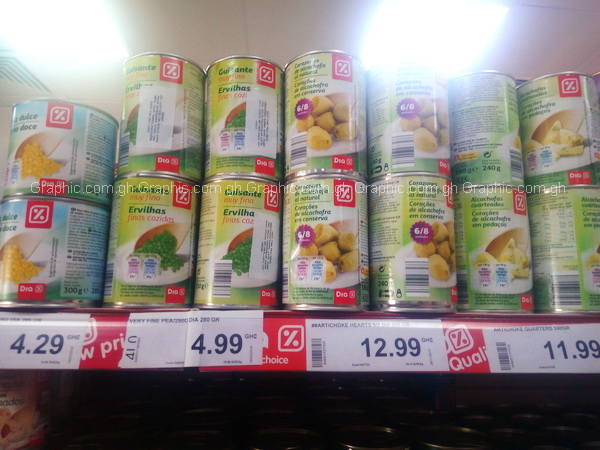 Some supermarkets and mothercare shops in Accra and its outskirts are selling food and baby products labelled in Chinese and Spanish, in contravention of the law.

Since some of the items may contain substances that may trigger allergic reactions, it is important for consumers to have full knowledge of their contents in the language they understand before patronising them.

While the products on the shelves of Citydia, a retail chain with 13 supermarkets in Ghana, include pasta, chicken soup, bottled asparagus, bottled Chinese salad, pickled scallion, fruit juice, sauce, chocolate, bottled pepper, stuffed almond and toiletries, those of China Mall on the Spintex Road are mainly non-food kitchen items.

During a visit to the central business district (CBD) of Accra last Monday and yesterday, the Daily Graphic found Amalena Mothercare, for example, stocked with baby cots that have Chinese manuals that might make it difficult to assemble the cots.

In some mothercare shops in the CBD, there were toys, baby wipes and diapers, all with Chinese labels.

The Ghana Standards Authority (food, drugs and other goods) General Labeling Rules, 1992 (LI 1541) requires that the labels of products, including food, shall be printed, impressed, embossed or stamped in the English Language.

Section 8.2 of the Food and Drugs Authority (FDA) Guidelines for the labelling of pre-packaged food also states that “if the language on the original label is not acceptable (not in English) to the consumer for whom it is intended, a supplementary label containing the mandatory information in English may be used instead of relabelling”.

It also states: “In the case of either labelling or a supplementary label, the mandatory information provided shall fully and accurately reflect that in the original label.”

Under Ghanaian law (Section 4.1.2 of the FDA Regulations), aligned to European Union laws, any pre-packed food or drink sold in the country which is known to cause hypersensitivity must be declared on the label.

These include cereals (including wheat, rye, barley, oats, or their hybridised strains and products of crustacea (including prawns, crabs and lobsters), egg and egg products, fish and fish products, peanuts (groundnuts), soyabeans, milk and milk products (lactose included), tree nuts and their products (almonds, hazelnuts, walnuts, Brazil nuts, cashews, pecans, pistachios and macadamia nuts) and sulphite in concentrations of 10mg/kg or more ((preservatives that are used in some foods and drinks).

When the Daily Graphic visited the Citydia Supermarket at the Dzorwulu Junction and the Adabraka Police Station, quite a number of the items on display had their labels in Spanish.

The supermarket tried to make up for the language barrier by translating the ingredients of some of the items into English, but the printouts were hardly visible.

For some other products in the supermarket, the only signs of a translation were the labels on the shelves, but not on the products themselves.

However, experts hold the view that the method is insufficient compliance with the law, as labels on shelves are not labels on the items.

An official of the Compliance Unit of Citydia, who spoke to the Daily Graphic on condition of anonymity, said the company received instruction from the FDA on Tuesday, April 10, 2018 to withdraw products whose labels were not in English.

He said the company had put in measures to carry out the instruction in the next two weeks by withdrawing the products to its warehouse at Kpone for labelling under the supervision of FDA officials.

“We are complying with the FDA directive. It is just that the shops are many and it is taking time,” the official said.

At the Amalena Mothercare in the CBD, the manuals for baby cots and some toys were in Chinese. Some other mothercare shops at Okaishie and the Makola Market were selling baby wipes with Chinese labels.

A Canada-based food safety specialist, Ms Gloria Mintah, who has had a similar experience in the past in Ghana, described the experience as frightening.

“What makes this very frightening is that the label of the particular product has a warning entirely in Spanish - ‘Puede contener trazas de gluten, crustaceos y apio’ - which in English means: ‘May contain traces of gluten, crustacean and celery.’

“While the law does not specifically state that warnings with respect to food are required on food labels, one can argue that ‘… handling precautions …’ may include warnings about the safety of the food itself, and should I be wrong, then immediate steps must be taken to amend the law to make this a specific requirement, or the authority should immediately exercise its power to make additional or specific labeling requirements regarding warnings,” she said.

"If the manufacturer has found it useful or important to give any warning about the food, the information may as well be meaningful to all the consumers of the food product.

“In this respect, the warning is a matter of life and death for someone who is allergic to gluten and crustaceans, and with respect to celery, it is high in sodium; doctors and nutritionists will not hesitate to advise against excessive intake of salt, especially by those with high blood pressure. Having the warning in only Spanish is entirely useless to a person who might have the need to know what it is that he or she is consuming, not to mention that it violates the laws of Ghana,” she added.

The Head of Communications at the FDA, Mr James Lartey, said the practice of labelling in a foreign language apart from English was wrong and said the FDA always destroyed such products during its market surveillance.

He said the law forbade the importation of food products with foreign language labels and where such products were allowed into the country, everything on the label must be translated into English and not only shelve labelling.

Mr Lartey stated that the only time imports with foreign labels were considered was when, for instance, a company imported the items to be used internally and not for commercial purposes outside.

“If a consumer goes to any supermarket, he or she should be able to read everything about the product. Assuming a consumer is allergic to groundnut and among a product’s ingredient there is groundnut, if the label is English, he or she can decide whether to buy or not to buy that product. When those things are not labelled in English, it creates a problem. When we go on the market, we destroy things like that,” he added.