Fear of attack on officers: Police withdraw patrols in Tamale 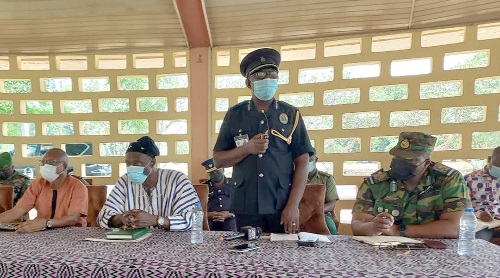 The Northern Regional Police Command has withdrawn all patrols and visibility snap-checks in the Tamale metropolis over safety concerns.

This follows the recent shooting incident at Lamashegu that resulted in the death of one person and injury of several others.

The police contend that the incident has heightened their fears and that they cannot risk their lives to embark on patrols in the area.

Since the incident occurred three weeks ago, the police have withdrawn both day and night patrols and snap-checks for fear of their lives as some aggrieved youth constantly threaten to attack them.

This has resulted in an increase in some pockets of crime, including car-snatching incidents in the metropolis in the past days.

The Northern Regional Police Crime Officer, Superintendent Bernard Baba Ananga, in an interview with the Daily Graphic said the command had decided to withdraw the patrols for fear of the officers’ lives because they always received threats.

“Until such a time that the people assure us that they won’t attack us, we can’t risk it. Our officers receive threats every day, which is very dangerous for us to operate,” he said.

At least one person, a fresh Junior High School graduate, died from gunshot wounds as police officers engaged some youth in violent hostilities on Sunday, February 13, 2022.

The incident was said to have occurred when a man driving an unregistered vehicle allegedly ignored a signal by a police patrol team to stop.

The police then chased and fired at him as he drove into the palace of the Lamashegu chief for refuge.

Reacting to the incident, the youth pelted stones at the police and burnt lorry tyres on the streets.

Meanwhile, some residents have expressed worry about the withdrawal of police patrols in the metropolis, saying the situation had heightened their fears over criminal attacks.

A resident, Adam Sule, said, “These days we are afraid to move out in the night because we don’t see police patrolling the streets. I have heard a number of robbery reports, which is very disturbing.”

Another resident, Ayisha Razak, appealed to authorities to as a matter of urgency resolve the issue between the police and the youth of the metropolis to enable the former to discharge their duties peacefully.

At a stakeholders’ dialogue in Tamale last Wednesday to deliberate on how to strengthen the relationship between the police and civilians in the region, the participants called for effective collaboration between the security apparatus and traditional authorities to enhance community policing and fight crimes.

That, they noted, would go a long way to stop crimes and prevent clashes between security personnel and civilians, which had become rampant in recent times.

The Paramount Chief of the Nanton Traditional Area, Naa Mahamadu Bawa, observed that with effective collaboration, the traditional authorities could assist the police in their operations and facilitate the arrest of suspects in their respective communities.

“Police and chiefs must team up to maintain law and order in society. Once we enhance our collaborations, the chiefs can always hand over suspects to the police for investigation and prosecution without the police having to struggle with suspects,” he said.

For his part, the Executive Secretary of the Northern Regional Peace Council, Father Thaddeus Kuusah, expressed worry about the recent spate of clashes between civilians and the police and emphasised the need for both groups to always use the appropriate channel to address their concerns rather than resorting to violence.

The Northern Regional Police Commander, COP Timothy Yoosah Bonga, said the police did not condone lawlessness and would not shield any officer who misconducted himself, urging the public to “understand that the police are human beings and will always go wrong, so you must not always take the law into your own hands when they go wrong”.

He advised the public to stop vandalising police property anytime they were upset about police operations, but rather use amicable means to get their concerns addressed.

For his part, the Northern Regional Minister, Alhaji Saani Shaibu Alhassan, hailed the role of the Chief of Lamashegu, Naa Ziblim Abdulai, in calming tensions in the area following a clash between some residents and the police, adding that, “But for the intervention of the chief, the police officer would have been lynched.”

He called on the people of the region to continue to live in peace and harmony and desist from all acts that could jeopardise peace in the area.