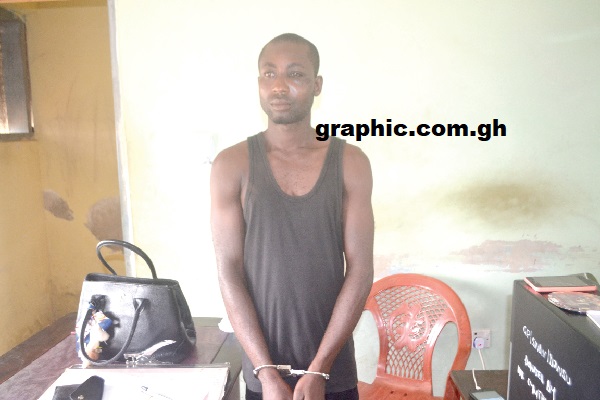 The Agona Swedru Circuit Court has sentenced a 37-year-old man residing at Kojo Armah, near Agona Swedru in the Central Region, to seven years’ imprisonment for chopping off the right leg of his two-year-old daughter.

The convict, Mawuli Bossu, pleaded not guilty to the charges of causing harm and use of an offensive weapon. He was, however, found guilty by the court, presided over by Mr Jonathan Nunoo.

He was also ordered to pay compensation of GHc6,000 to his daughter.

The facts of the case, as presented by the prosecution, led by Inspector Chare N. Salia, were that in December 2019, a confrontation ensued between Bossu and his wife, Joana Amamoo Bossu, which turned violent and eventually led him to chop off his daughter’s right leg.

Surviving driver in accident that claimed 34 lives jailed one year

The prosecutor said in the course of the misunderstanding between Bossu and his wife, Bossu got hold of a machete and, in a fit of rage, tried to slash his wife, only for the machete to land on the right leg of his daughter, who was strapped to her mother’s back, thereby severing the leg.

With the help of neighbours, Joana rushed the little girl to the Swedru Government Hospital, but doctors discovered, after examining the leg, that it had been severely damaged and had to be amputated.

Bossu was arrested by some of the eyewitnesses of the calamity and handed over to the Agona Swedru Police.

According to a relative of Joana’s, relations between the couple had become strained for some time now, compelling Joana to leave her matrimonial home to rent a room in the same community where she lived with her husband.

According to the source, at a point in time, Joana went to her husband’s house to take some of her belongings and realised that Bossu had destroyed some of her clothes.

That resulted in a serious confrontation between the two.

After they had been separated from being aggressive on each other, Joana went back to her new home but returned to the husband’s house the following day for the rest of her belongings.

At that material time, some relatives of Bossu’s who were attending a funeral nearby had come to visit him and so he asked Joana to prepare food for them.

She took advantage of the meeting and narrated to Bossu’s relatives how her husband had destroyed her clothes, and that resulted in verbal exchanges between the two.

And just when Joana entered the bedroom to take her belongings, Bossu, who resisted her fiercely, later pulled out a sharp machete and aimed it at her but he, unfortunately, missed the target and rather chopped off the right leg of his daughter who was strapped to her mother’s back.