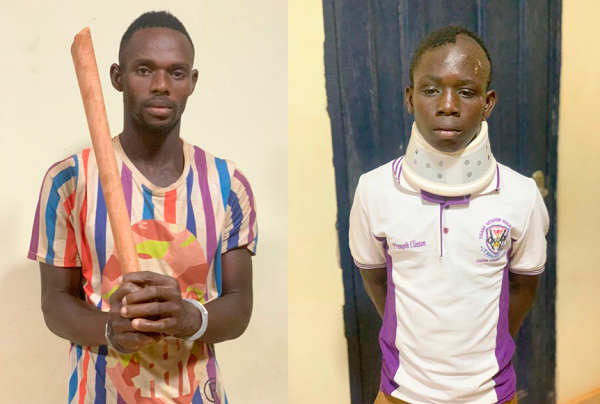 The Bekwai Circuit Court, presided over by Mr Mark Diboro has remanded into police custody, a 32-year-old farmer, Daniel Dery, for robbery.

He allegedly used the handle of a pick axe to club his victim, a commercial motorcycle rider, popularly known as Okada, whose services he had employed.

Dery, a resident of Asawinso Ketawa in the Western Region, would reappear before the court on July 16, 2021. His plea was not taken.

Presenting the facts of the case, Assistant Superintendent of Police (ASP), Mr Felix Akowuah, said the complainant and victim in the case was 17-year-old Ebenezer Boateng, an Okada rider and resident of Manso Keniago in the Ashanti Region, while the accused person, Dery, is a farmer based in Asawinso Ketawa in the Western North Region.

He said earlier this month, Dery went to Manso Keniago under the pretext of visiting his brother but with the intention of stealing a motorbike for his farming activities in Asawinso Ketawa.

According to the prosecution, after a careful plan, he engaged the services of the complainant to take him to Asawinso Ketawa in the Western Region.

He said while on the way, Dery asked Boateng to help him buy the handle to replace that of his pick axe and promised to refund him when they got to his place at Asawinso as he did not have enough funds on him.

Unknown to Boateng, he was purchasing the weapon that would be used to harm him.

Mr Akowuah said when they got to an obscure place and far from town, he asked Boateng to stop for him to urinate “and it was then that he used the stick to hit Boateng in the neck and head.

“Thinking that he was dead, he took the motorbike and sped off, and left,” ASP Akowauh told the court.

He said Boateng, who initially lost consciousness, managed to crawl to the roadside where he was assisted by some good Samaritans and taken to the hospital.

However, Mr Akowuah said a message had already been sent out to all checkpoints and other okada riders describing Dery and the motorbike.

“When he got to Asawinso, the motor riders saw him and identified him to be the one and caused his arrest and handed him over to the police,” he stated.