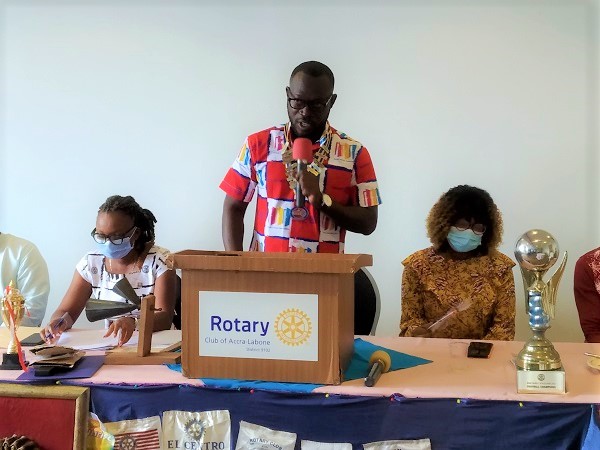 Mr Emmanuel Anum Mensah, a business development manager has been inducted into office as the new President of the Rotary Club of Accra-Labone.

He takes over from the Immediate Past President (IPP) of the club Doreen Ashiboe Mensah.

Rotarian President (RP) Emmanuel will lead a 14-member Board including, IPP Doreen, Past President Kwaku Tweneboah Ofosu, Esquire Lamtiig Apanga and Madam Gifty Annan-Myers to steer the activities of the club for the 2021/2022 Rotary Year.

In an address after taking the oath of office and receiving the medal and trophies of the club, RP Emmanuel said he would use his tenure to pursue causes that will benefit society.

"I joined Rotary because I wanted to help make an impact in society and there is no doubt that this will reflect during my tenure as President," RP Emmanuel said.

"I will be devoted to Rotary's causes in this role, the same way I Have exhibited my commitment since I was first inducted into this great club of ours. I would also like to thank Immediate Past President Doreen and her Board for the fruitful past year and her unfailing assistance to me as her successor".

He said the club's activities for the year will be guided by this year's Rotary theme: "Serve to Change Live".

Outlining some projects the club intends to undertake, RP Mensah said the club would use a grant from Rotary Internation to provide nine mechanized boreholes to some communities in the Ga West District of Accra.

He also indicated that the club will donate sanitary pads to the female patients of the Ankaful Psychiatric Hospital and students of the Cape Coast School for the Blind and Deaf.

The club also intends to renovate the La Yahoshua Junior High School Library/Computer Laboratory and donate items to their adopted son at the Tema SOS Village, the Reason Foundation at Awoshie and the Children's Ward at the Nsawam Government Hospital.

Reflecting on her tenure, IPP Doreen said she was keen to reciprocate the support RP Emmanuel which enabled her to honour four major pledges during her tenure as President.

The pledges included the construction of a mechanized borehole for the people of Alavanyo in the Ga West District, refurbishing the Children's Ward of the Nsawam Hospital, distributing Personal Protective Equipment to residents of Abokobi and a donation of sanitary pads to patients at the Pantang Hospital.

About Rotary Club Of Accra-Labone

The Rotary Club of Accra-Labone received its charter on June 29, 2001.

The club was launched with a membership of 35 Rotarians, after a year of preparation under the ‘tutelage’ of the extension committee of the Rotary Club of Accra. The club’s Charter President was PP Rita Adjetey. Her classification was disability consulting.

The Club’s Charter was formally presented to the club on the night of August 31, 2001, by District Governor Eduardo Socorro during the tenure of Rotary International President Richard D. King (2001–2002).