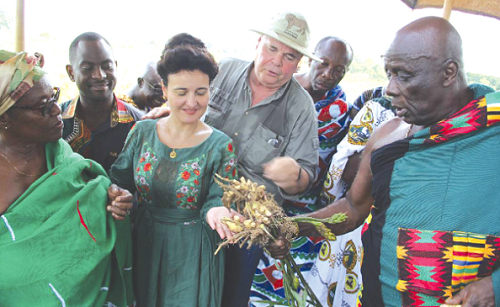 Mr Bühler (2nd from right) showing Osagyefuo Amoatia Ofori Panin (right), the Okyenhene, some of the ginger being cultivated on the Bunso Organic Demonstration Farm. With them are Nana Dokua (left), the Okyenhemaa; Cristine (3rd from left), the wife of Mr Bühler, and Dr Isaac Adodoadji (2nd from left). Inset: Ginger being grown on the Demonstration Farm. Picture: Nana Konadu Agyeman
30.5k Shares

Speakers at the maiden Organic Farmers Day durbar at Bunso in the Eastern Region have urged the government and farmers to embrace organic farming as the “new gold” that must be tapped to turn around the economic fortunes of the country.

They said it was only organic farming that guaranteed greater fertility of the land and more resilience of farmers and families to the impact of economic crisis and climate change.

Besides, the speakers said organic farming would have an enormous positive impact on Ghana’s trade balance as it would reduce the importation of highly priced synthetic fertilisers and pesticides as well as food products.

The speakers were the German Ambassador to Ghana, Daniel Krull; the Okyenhene, Osagyefuo Amoatia Ofori Panin, and the President of Ecoland International, a German-based institution that promotes organic farming globally, Rudolf Bühler.

The event, which was held on the theme: “Promoting small-scale agriculture through organic farming” brought together many smallholder farmers in the Eastern Region to celebrate achievements in organic farming and to strengthen the capacity of institutions that promote organic agriculture in Ghana.


It was jointly organised by the Ecoland International and the University College of Agriculture and Environment (UCAES).

Mr Krull said organic farming improved the livelihoods of farmers because they did not need cash for expensive fertilisers.

He said organic farming also improved the livelihoods of farmers who only had to replace pesticides and fertilisers with labour, helping to stop the importation of fertilisers and food products.

“And I strongly encourage you to go further down this road because we know this from Germany and Europe that all it needs is a mind shift in farming,” Mr Krull said.

“Farmers need to understand and appreciate that opting for organic farming is cheaper than buying tractors,” he said, and commended UCAES for commencing degree programmes in organic farming.

The German Ambassador commended the Okyenhene and the President of Ecoland International for their commitment to support the establishment of a new field for training and research in organic farming at UCAES, for which he expressed the hope would become the capital of organic farming in Ghana.

The Okyenhene expressed the conviction that organic farming in the country could work out if “we respect the rule of law and the rule of nature”.

In his view, there was so much future in organic farming that it only needed to be tapped to help create employment opportunities for the people, particularly the youth.

He urged the country to grow and eat its own food and export some so that “we can get foreign exchange. Let us use the good soil that God has given us”.

For his part, Mr Bühler expressed excitement that all over the world organic agriculture was the new gold as it wielded so much potential.

He indicated that given the present international economic crisis, Ghana must avoid the negative impact of “large amounts of food imports on the economy”.

“Shortages and inflation might come up since all these imports are subject to the foreign exchange rate,” he said, citing the depreciation of the cedi against the dollar in January 2022,” Mr Bühler said.

He added that the development of food sovereignty by developing and increasing agricultural production was of great importance but should be done in a sustainable, environmentally and climate-friendly way, using the most resource-efficient agricultural practices which were the organic agricultural methods.