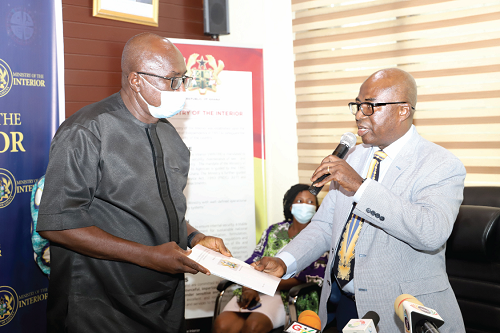 Justice George Kingsley Koomson (right), Chairman of the Committee on the Ejura incident, presenting the report to Mr Ambrose Dery (left), Minister for the Interior, at a meeting in Accra. Picture: GABRIEL AHIABOR
30.5k Shares

The committee set up by the Minister of the Interior to conduct a public inquiry into the disturbances that led to the death of two persons at Ejura in the Ashanti Region yesterday presented its report to the sector Minister, Mr Ambrose Dery, in Accra.

The 54-page report contains findings and recommendations, among other things, to forestall a recurrence of the incident at Ejura in any part of the country.

The presentation of the report followed the completion of work by the three-member committee chaired by a Justice of the Court of Appeal, Justice George Kingsley Koomson.

Other members of the committee are a Security Expert, Dr Vladimir Antwi-Danso,  and Ms Juliet Amoah, the Executive Director of Penplusbytes, a not-for-profit organisation into good governance and the promotion of new media.

A Principal State Attorney, Ms Marie-Louise Simmons, was the Secretary.

Originally the committee had 10 days (ending July 9, 2021) to complete its work and present its report but the period was extended for about a week.

Presenting the report, Mr Koomson thanked the minister for the confidence reposed in the members to carry out such an important assignment and for them to serve their country.

He said they (committee members) knew that it was an important and delicate assignment with a huge national expectation and that in view of that they attached importance to it and dedicated themselves to all issues with meticulous attention.

He said the committee heard  22 witnesses, review of volumes of documents, audios and videos in the course of its work.

Responding, Mr Dery congratulated the committee on completing its work and submitting the report.

He said the manner in which the work was done by the committee was of immense public interest, especially the circumstances that led to the disturbances in Ejura when two persons lost their lives and others were injured on June 29 this year.

He said he accepted the report and would study it and then submit it to the president in consonance with the directive that he gave.

Mr Dery thanked media for the live telecast of the committee’s sittings and also thanked the public for the interest shown.

He also thanked those who appeared before the committee to enable it to carry out its work.

He expressed the hope that the report would help to resolve conflicting stories and contribute to a better security for the country.

On Saturday, June 26, 2021, social media activist, Macho Kaaka, was attacked by some unknown assailants in front of his house around 1:30 a.m. and left in a critical condition.

He was rushed to the Ejura Government Hospital, from where he was referred to the Komfo Anokye Teaching Hospital around midday on Monday, June 28, 2021 but died on admission.

When news about his death broke, the youth of Ejura embarked on a demonstration that Monday but that was quelled by the police, with assistance from the military.

However, on Tuesday, on their return from the cemetery, after burying Kaaka, the youth decided to demonstrate.

In the process, they clashed with the security, leading to the death of Abdul Nasir Yussif and Muntala Mohammed.