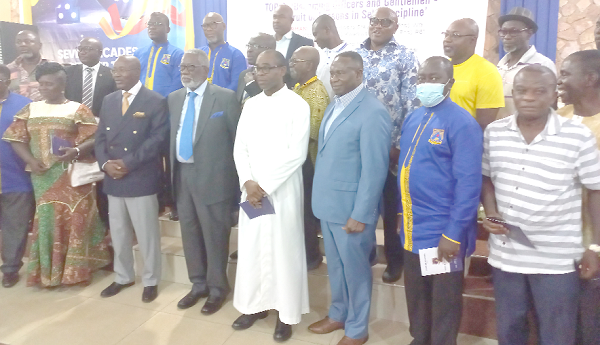 Some of the old students of OWASS and Rev. Fr Stephen Owusu Sekyere, Headmaster of the school, at the lecture Follow @Graphicgh

A Retired Naval Officer of the Ghana Armed Forces, Commodore Steve Darbo, has urged Ghanaians not to wish for a coup d’état as its repercussions are worse than whatever situation exists in a democracy.

He said examples abound from the sub-region that coups had never offered any country a better alternative and as such people should bid their time and change the government through the ballot.

He, therefore, urged those urging the army to take guns to topple the government due to economic hardships to desist from it.

Commodore Darbo gave the caution at the Burgess, Kalinauckus and Adu-Amankwa Memorial Lecture as part of activities marking the 70th anniversary of the Opoku Ware Secondary School (OWASS).

The lecture was on the theme: “Becoming officers and gentlemen: The fruit of lessons in self-discipline.”

The retired naval officer said he was of the conviction that the officers of the Ghana Armed Forces would never take up guns to topple the government as they were much aware of the repercussions, having experienced the effects of wars and civil unrest from their peace keeping duties.

That notwithstanding, he asked that such ideas should not be put forth and given space in the current dispensation to give impetus to some few daring soldiers who may want to exhibit their youthful exuberance.

As part of the solutions to instill discipline in Ghanaians, Commodore Darbo proposed that all tertiary students must be made to undergo a compulsory military service for at least six months to learn the rudiments of self-discipline.

He said he believed that a stint with the military would instill discipline in them and curb the rising incidence of indiscipline in society today.

The Guest Speaker, Naval Captain Kwadwo A. Butah (retd), shared his experience from the Ghana Navy and how the training received at the training school helped to shape his life.

He said the regimental training of the army did not only make them officers but also gentlemen.

According to him, as officers, they were expected to exhibit certain traits and one needed to be disciplined in order to be able to do so.