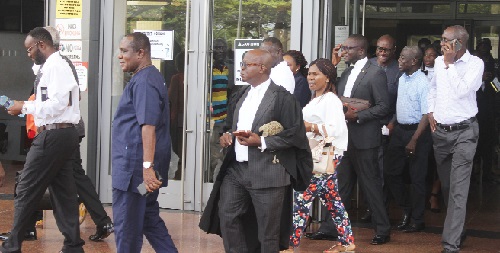 The Founder of the defunct Capital Bank, William Ato Essien, has failed to convince the Accra High Court to allow him to pay GH¢90 million to the state instead of possibly serving a prison term.

Essien, who is on trial for allegedly stealing part of a GH¢620 million liquidity support extended to erstwhile Capital Bank by the Bank of Ghana (BoG), had reached an agreement with the Attorney-General (A-G) to refund GH¢90million as restitution to the state.

However, the court, presided over by Justice Eric Kyei Baffour, yesterday, rejected the agreement on the basis that it was not in line with law, and the amount was insufficient.

Not in state’s interest

According to the court, Essien must pay the money at the prevailing value, taking into consideration the current exchange rate and also pay interest.

Again, Justice Kyei Baffour was of the considered view that allowing Essien to pay such an amount after three years of trial would mean that he (Essien) had outwitted the system and played a fast one on the state.

“The accused person will only enrich himself at the expense of the Republic and avoid custodial sentence,” Justice Kyei Baffour ruled, thus rejecting the agreement before he adjourned a judgment to determine the fate of Essien and two other accused persons.

The agreement between Essien and the A-G was pursuant to Section 35 of the Courts Act, 1993 (Act 459) which allows an accused person to plead guilty to an offence involving financial loss to the state and agree to refund the money to the state.

While the state gets the money lost, the accused person is expected to avoid custodial sentence.

However, per Section 35(4) of Act 459, any such agreement between the prosecution and the accused person has to be approved by the court.

Per the terms of the agreement reached between Essien and the A-G, Essien must pay GH¢90 million within a period of one year.

He also agreed to plead guilty to charges of stealing and money laundering.

Counsel for Essien, Baffour Ashie Bonsu, submitted that his client and the A-G had been having discussions since the start of the trial and had finally reached an agreement.

A Deputy A-G, Alfred Tuah Yeboah, submitted that the two parties reached an agreement, but that was subject to the approval of the court.

In a ruling to reject the agreement, Justice Kyei Baffour held that Essien took the money in 2015 when the value of the cedi to the dollar was GH¢3.79, but the current exchange rate was GH¢13.11 and therefore, the amount must reflect the current value.

“If A1 (Essien) has accepted a plea of guilty and wants to pay restitution, then Capital Bank should not be made worse off. If he wants to refund GH¢90 million, he must refund its equivalence as at today or the time it will be fully paid,” the judge ruled.

Justice Kyei Baffour also held that apart from the amount reflecting the current value, the agreement was also silent on Essien paying any interest on the amount.

“Just paying GH¢90 million is not a full restitution but a partial one. Also as at a time when judgment is ready, I wonder if this is the best deal for the prosecution,” he said.

He also rejected the agreement on the grounds that the case was not within the remit of Section 35 of Act 451.

According to him, Section 35 of Act 451 could only be applicable in cases where there had been financial loss to the state for which accused persons wanted to refund the money to the state

In the instant case, he said the money involved belonged to depositors and shareholders of the erstwhile Capital Bank and not the state or any agency of the state.

It was the considered view of the court that although BoG extended a credit facility of GH¢620m to Capital Bank, the money was a loan and therefore Essien could not have been said to have caused financial loss to the state.

“The monies belonged to Capital Bank. It is monies of shareholders and depositors and not the government. It is my candid assessment that Section 35 of Act 459 is inapplicable to this case,” Justice Kyei Baffour held.

Justice Kyei Baffour, a Justice of the Court of Appeal, sitting as an additional High Court judge, adjourned the trial to December 13, 2022 for the prosecution and Essien to come back with a better deal and also convince the court as to whether Section 35 of Act 459 was applicable in the case.

Essien is standing trial with Fitzgerald Odonkor, a former MD of Capital Bank and the MD of MC Management Services, a company said to be owned by Essien and Tettey Nettey.