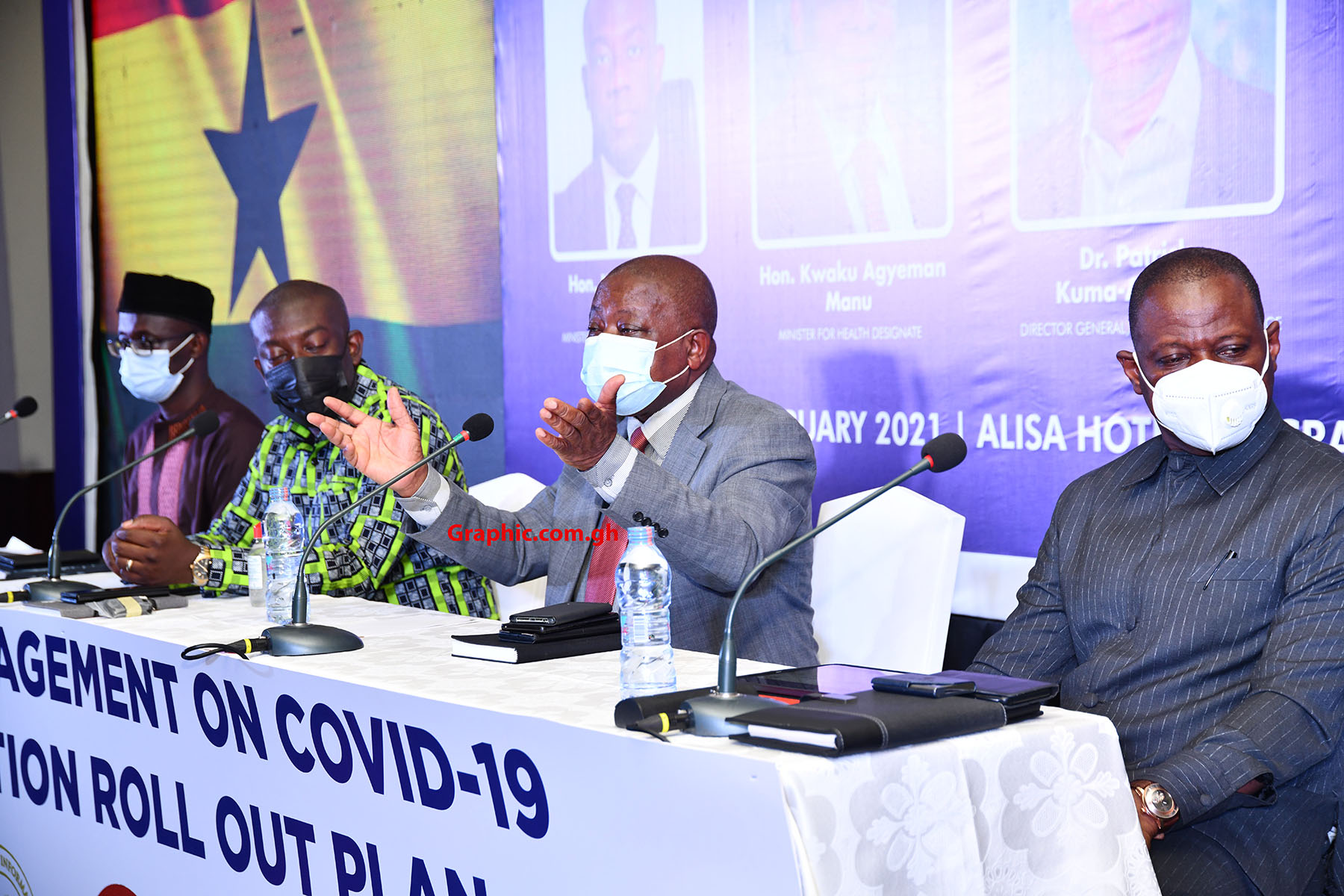 The government is urging the public to disregard all myths concerning COVID-19 vaccines and avail themselves for vaccination when it starts within three weeks.

The Minister designate for Health, Mr Kwaku Agyemang-Manu, who made the call on behalf of the government, said vaccination had been proven to be the most single method of breaking transmission when used to complement other safety protocols.

At a public engagement on COVID-19 vaccination rollout plan in Accra yesterday, Mr Agyemang-Manu reiterated that the vaccines selected had been established to be safe and effective.

The government has settled on two vaccines, the Covishield (AstraZeneca vaccine by Serum Institute of India) and Russia's Sputnik V.

The minister designate for Health appealed to the media to help educate the public on the untruths, demystify and counter the anti-vaccine campaign messages making the rounds, a position which was supported by the Minister of Information designate, Mr Kojo Oppong Nkrumah.

The Food and Drugs Authority (FDA), at the same event, said it had authenticated the two vaccines for use, as they were also globally approved vaccines proven to be effective and safe for use locally.

It used an Emergency Use Authorisation Path for the authentication process.

That approach, the FDA explained, was used to ensure needed medical products were made available in a timely manner.

The authority gave an assurance that due diligence had been done in the authorisation process and ensured that no safety and efficacy standards were bypassed or compromised, except that the process was expedited for the public good.

Mr Agyemang-Manu said the country had an existing robust vaccination system that would be used to conduct the COVID-19 vaccination across the country.

He said after recording its first two cases on March 12, last year, a number of response measures were put in place and the situation was contained.

“This helped to reduce our numbers but unfortunately we are experiencing a second wave and there is nothing more we can do than to introduce complementary and more effective ways of preventing the spread further,” Mr Agyemang-Manu said.

He said over time, the vaccines had proved globally to be the single most effective preventive measure against COVID-19 as of now.

The Minister designate for Health, however, added that vaccination would have its maximum impact if used as a complement with hand and respiratory hygiene protocols.

Therefore, the government had in place advanced processes to get the entire population vaccinated, he stated.

That was hinged on a national COVID-19 deployment plan on which the public would be engaged as well as on the importance of taking the vaccine.

The Director-General of the GHS, Dr Patrick Kuma-Aboagye, said the use of vaccines was a major complementary measure for breaking the COVID-19 transmission due to lack of optimum adherence to the preventive protocol.

He said because people had let down their guard on the preventive protocols, the gains made during the first wave of the outbreak were fast eroding.

Due to non-adherence to the protocol, national burden, which was far below 8,000 and reduced to as low as 80 cases, had now risen to 8,000 in the second wave, Dr Kuma-Aboagye said.

Providing highlights of the national COVID-19 National Vaccine Deployment Plan (NVDP) for COVID-19, the Manager of the Expanded Programme on Immunisation (EPI) of the Ghana GHS, Dr Kwame Amponsa-Achiano, reiterated that distribution strategies would be based on segmentation of the population based on vulnerabilities.

The second phase will cover other essential service providers, people above 60 years, second cycle and tertiary students, all teachers, members of the three arms of government and the media.

Phase three will involve other members of the population, except children under 16 and pregnant women.

He indicated that the programme would be expanded to include children under 16 and pregnant women over time.