Decongestion in Tamale ahead of interchange commissioning 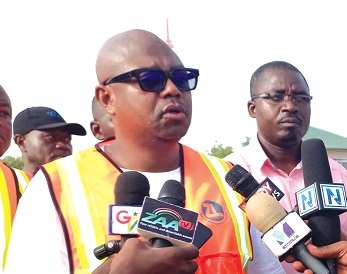 Mr Sule Salifu, MCE of Tamale, speaking to the media after the exercise Follow @Graphicgh

The Tamale Metropolitan Assembly (TaMA) on Monday (March 28, 2022) morning embarked on a decongestion exercise within the central business district to clear off traders who had illegally occupied the pavements along the newly constructed interchange.

The security task force led by the Metropolitan Chief Executive, Mr Sule Salifu, went round the central business district and removed unauthorised structures, as well as vendors and hawkers on the pavements.

The exercise was part of efforts to ensure orderliness and sanity on the streets ahead of the commissioning of the project by President Nana Addo Dankwa Akufo-Addo today.

Speaking to the media after the exercise, Mr Salifu said the exercise was in line with efforts by the assembly to instil discipline along the principal streets of the metropolis to ensure that various public infrastructure outlay were used only for the purposes for which they were built.

He indicated that the affected traders would be relocated to satellite markets, adding that so far, all the hawkers on the pavements and other market unions had agreed to comply with the directive. 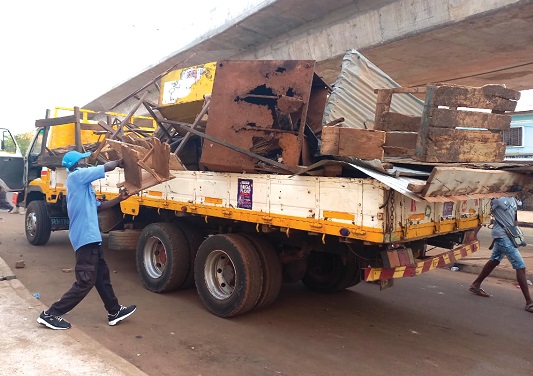 Members of the taskforce conveying some items of the hawkers

“We have asked them to relocate to the Kukuo market which is around the Tamale Teaching Hospital and they have complied with this directive. The various unions, including the Tipper Truck Drivers’ Union, have also agreed to relocate to the Kakpayili market. This will help give the metropolis the facelift we all desire,” he said.

Mr Salifu said the assembly had served the traders and drivers a notice about a month ago to relocate, to which some complied while others did not, which led to their forceful ejection.

He added that traders whose items were confiscated by the task force during the exercise would be made to pay a fee before collecting them.

“We also want to talk to the traders to desist from selling around the interchange because we have instructed the police and the task force to arrest and prosecute such people.

“We want to take this measure to serve as a deterrent to others because the investment in this project is very huge, so it is only proper we derive the needed benefit from it,” he noted.

He indicated that work on the project had been completed and President Akufo-Addo was expected to open it to traffic today.

Mr Salifu, therefore, commended the President for initiating the project, which was the first of its kind in the northern part of the country, saying it would go a long way to ease traffic congestion and beautify the metropolis.