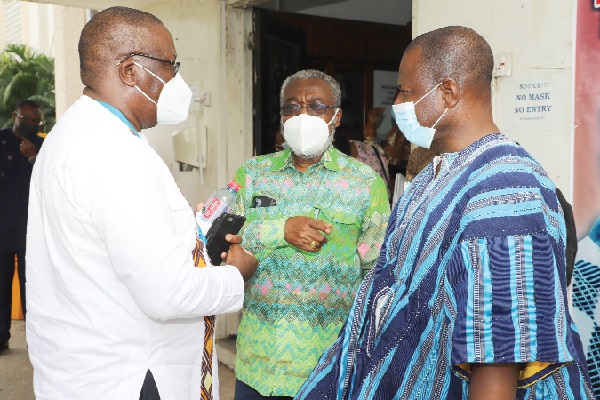 The Ministry of Health has declared December Vaccination Month to ensure the implementation of a mandatory vaccination policy from January next year.

The policy for mandatory vaccination will start with selected groups of people and patrons of selected events.

The Director-General of the Ghana Health Service (GHS), Dr Patrick Kuma-Aboagye, who announced this on behalf of the sector Minister, Mr Kwaku Agyeman-Manu, named the selected groups of people to include all workers in government institutions and all commercial drivers.

Others are members of the three arms of government, all healthcare workers, all security personnel and all students and staff of secondary and tertiary institutions.

“These people were those given priority even when the country had only few vaccines, and so we expect all of them to be vaccinated; and with the increasing availability of vaccines, we are declaring December the month for vaccination for those who were not vaccinated to do so,” he said.

Mr-Agyeman-Manu added that all patrons and staff of nightclubs, beaches, sports stadia and restaurants must be vaccinated and show proof before being allowed access.

He said other modalities for the enforcement and implementation of the policy would be made public at the launch of the vaccine month campaign during the week.

Providing an update on the COVID-19, the director-general said the GHS was increasing surveillance at the Kotoka International Airport (KIA) for the new variant, Omicron, which had been reported in Italy and South Africa.

He said the surveillance would also be carried out through other strategies, such as genomic sequencing of all positive cases picked up, particularly among people from countries of concern.

He said the marginal increase in cases recorded at the KIA this month, compared to the same period last year, was a signal that interventions should not be taken for granted.

He said the situation at the KIA also mimicked the fourth wave situation in some parts of the world, which served as a warning sign for all stakeholders.

Dr Kuma-Aboagye, however, gave an assurance that the MoH and the GHS were doing all they could to prevent a spillover.

He said a reinforcement of response measures had been engineered to prevent a surge occasioned by the festive season and the surge in other parts of the world.

“All other protocols still stand and are being enforced strictly, but the GHS will be monitoring to inform any additional measures that would be required,” he said.

He announced the receipt of about 12,324,710 doses of vaccines, with 5,451,291 of the population receiving at least one jab as of November 27, this year, representing at least 21 per cent of the targeted population for reaching herd immunity.

He said almost all facilities were administering vaccines, while other strategies, such as camp-out at hard-to-reach areas, had been deployed to take the vaccines to people in schools, workplaces, religious gatherings, sports stadia, house-to-house, among others to ensure everyone had access to them.

He said the pipeline had also assured the country of the delivery of more than seven million doses between now and December this year, which would bring the number of doses to over 20 million.

“What is left is for us to avail ourselves so we can meet the 20 million target to reach head immunity before the close of the year.

“The GHS, for our part, has the capacity to deliver and we are ready to sacrifice to do that by enhancing all vaccinating strategies required, such as house-to-house, outreaches, camp-outs, mobile, static, among others,” he said.

Dr Kuma-Aboagye said since workplaces contributed largely to the cases in all three waves, the GHS was appealing to institutions to use the mandatory vaccination as part of the compulsory protocols for staff and patrons.

That would encourage more workers and patrons of services to get vaccinated in support of the national vaccination drive, he said.

The Country Representative of the World Health Organisation, Dr Francis Kasolo, who was at the press conference, appealed to the media to educate the public that any approved vaccine, used strictly with safety protocols, was very effective against any variant.

“We ask that the media focus on vaccination and safety protocols, instead of blowing up new variants, which science has shown will continue to emerge,” he said.