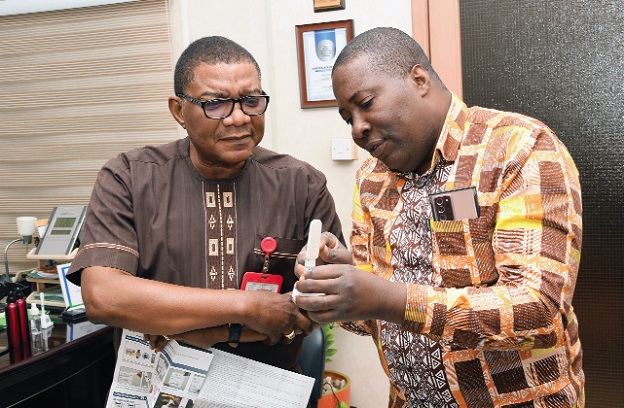 Dr Stephen Ayisi Addo (right), Progamme Manager for National STIs and HIV/AIDS Control Programmes, demonstrating the use of the HIV/AIDS test kit to Kobby Asmah, Editor, Graphic, when he paid a courtesy call on him. Picture: EBOW HANSON
30.5k Shares

From March this year, HIV self-test kit will be available at pharmacies and health facilities across the country for purchase to enable people to self-test to know their HIV status.

The Programme Manager of the National STIs and HIV/AIDS Control Programme (NACP), Dr Stephen Ayisi Addo, who disclosed this to the Daily Graphic in Accra last Tuesday, said the introduction of the self-test kit meant that HIV testing could now be done on the doorstep of people and at any space they considered to be private and confidential.

“You don’t have to come to the clinic to queue to do the test. Instead of coming to test in the presence of a health worker, you also have the option to test privately in your room, office or anywhere so that when you get to know the results, you can go to a facility nearby to confirm it,” he explained.

Dr Ayisi Addo was interacting with the Editor, Graphic, Kobby Asmah, when he led a three-member delegation from the NACP to pay a courtesy call on him.

He said upon introduction, the self-test kit would be free for now at health facilities but at the pharmacies, they would attract service charges.

He said currently, some pharmacies were stocking the HIV self-test kit on a pilot basis, pending a scaling-up with additional outlets after the national launch in March this year.

Dr Ayisi Addo said ahead of the national launch of the kit, service providers were being trained while engaging some community-based organisations to sensitise the public to understand issues around the kit and also for them to see it as an empowering tool.

He explained that in order to ensure sustenance of the kit on the market when introduced and to avoid monopoly and its attendant price increases, there would be different types of test kit on the market to create competition.

Touching on the progress made so far regarding HIV/AIDS fight in the country, Dr Ayisi Addo said the NACP was happy about the progress that had been made, pointing out that Persons Living with HIV (PLHIV) who took their medications well had viral suppression and lived normal healthy lives just like people with chronic illnesses such as asthma, diabetes or hypertension.

The NACP programme manager said the face of HIV had now changed because of the progress that had been made in research and its management.

Dr Ayisi Addo added that because the country had over 260,000 PLHIV on treatment, it was uncommon to come across people who were seriously ill with the disease.

Unfortunately, he said because of that some youth did not believe that HIV was real and that complacency was leading to subtle transmission of the disease, leading to the recording of almost 18,000 new infections annually.

“For the first half of last year, almost 24,000 new infections were recorded. After the Daily Graphic’s August 24 publication on the number of cases, people have since woken up,” he said.

“As of the end of the third quarter of last year, we had identified 33,870 people positive for HIV. This is to tell you that HIV is still real and we need to continue the battle and the war in the media for the public to know that they need to do something about it, especially young people,” Dr Ayisi Addo said.

Quoting the HIV/AIDS Sentinel Survey, the NACP national programme manager said in 2020 the prevalence of the disease among 15 to 24-year-olds was 1.1 per cent and that increased to 1.5 per cent in 2021, which meant that they were having increases in young population due to ignorance and complacency.

Dr Ayisi Addo expressed gratitude to the Daily Graphic for the support it had given the programme over the years in the publication of news stories and editorials as well as highlighting their priorities.

After demonstrating how the self-test kit works, he presented packs of the kit and boxes of condoms to his host.

For his part, Mr Asmah stressed the need for continuous engagement with NACP until the country was able to achieve the 2030 target set by the UNAIDS and the World Health Organisation (WHO) when HIV would no longer be a public health problem.

Supported by his deputy, Theophilus Yartey, Mr Asmah said the new infections recorded in the third quarter of last year were an indication that all was not well, saying should the trend continue, the story would not be pleasant.

“Nonetheless, there are indications that if we intensify our public education, we can meet the 95/95/95 goal. We need to intensify our engagement and collaboration. If we don’t get our act together, despite the success story we have, we may lose and we cannot lose it at this time,” Mr Asmah stressed.