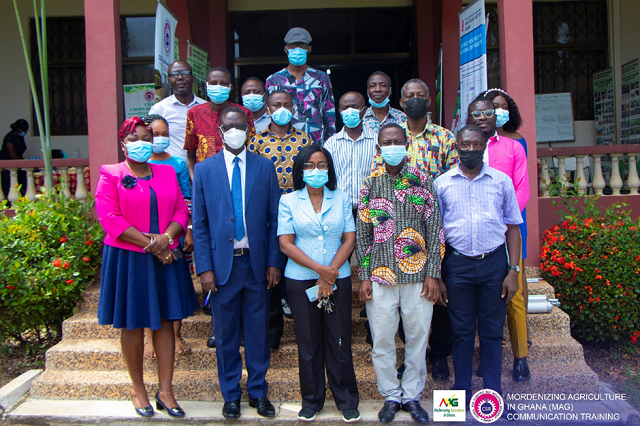 Participants at the Capacity Building in Science, Technology and Agriculture for selected Journalists in Kumasi

The Council for Scientific and Industrial Research (CSIR) with support from the Canadian government, has through the Modernization of Agriculture in Ghana (MAG) programme organised a “Partnership Session” for journalists in the Ashanti Region.

Speaking in his welcome and opening address, the Ag. Director of CSIR-Soil Research Institute, Dr. Edward Yeboah shared CSIR’s Strategic Plan which has the goal of Promoting Accelerated National Socio-Economic Development through Research and Innovation, Technology Transfer and Training in partnership with the media, private and public sectors.

He said the Partnership Session that seeks to bridge the gap between CSIR and the media, comes at an opportune time to help disseminate innovative research outputs to stakeholders and to support one of CSIR’s seven strategic thrusts, namely; CSIR Rebranding and Corporate Visibility Improvement.

He was supported in his address by Prof. (Mrs.) Marian Quain, Deputy Director of CSIR-Crops Research Institute, who encouraged journalists to develop an interest in science journalism to report accurately Science, Technology, Innovation (STI) and related information.

The Head of Corporate Affairs at CSIR, Ms. Benedicta Nkrumah-Boateng who made a presentation on the topic ‘CSIR AND THE MEDIA, Our Powerful past, our promising present, our prosperous future’, shared the history of CSIR’s relationship with the media; the vision, objectives and significant achievements, and reiterated CSIR’s keen interest in developing stronger relations with the media with the creation of a Media Corps “Ambassadors”.

She said the process has started with selected media houses in Accra and following the engagement, “Ambassadors” would be established for the middle and northern sectors of Ghana.

“Together, we will work to educate the public about technologies, innovations and services provided by CSIR”, she added, saying for instance that, Cassava-Eskamay® pronounced “Eskamaye” in the Gonja language literally means everybody says it is high yielding, it is good. It was released in 2003 and has a rough storage root texture. Its uses and benefits include high gari swelling abilities and it is recommended for tuo-zafi, gari flour and starch. (Source Manual of Agriculture Technologies produced by CSIR, MAG and MoFA).

MAG is a budgetary support programme extended to Ghana by the Government of Canada. The programme provides resources to support the delivery of agricultural advisory services to subsistence farmers and farmer groups in Ghana. The ultimate outcome is a more modern, equitable and sustainable agricultural sector that contributes to food security.

Details about the MAG programme was presented by Prof. Joe Manu-Aduening, a MAG Focal person.

The need for understanding the nomenclature of CSIR was presented by a Communications Advisor of CSIR/MAG, Donald Dwira, who shared 101 acronyms commonly used by CSIR.

It aimed at helping journalists overcome the language barrier of understanding the nomenclature used by CSIR and the scientific and technology world.

He also drew attention to the oft-repeated misnomer by sections of the public of addressing CSIR as a Center instead of a Council, explaining that it is a sore point for the Council because a Centre connotes a small and insignificant entity.

CSIR is made up of 13 Research Institutes, (eight of which are agriculture based), a head office and over 50 Research Centers, Units and Field Stations spread across the country.

He said these institutes are managed by highly skilled human resource made up of over 400 scientists/senior members and approximately a 3,000 workforce. Over the years, CSIR has chalked successes in agro-processing, value-addition, environmental management and fish farming, among others.

For instance, CSIR has released no less than 14 maize varieties carrying different traits to fit all growing niches and preferences. CSIR maize varieties are being used in more than 15 African countries.

United Nations days that are relevant to CSIR and the Institutes were also shared. These days provide good opportunities for the media and CSIR to write about themes of mutual and global interest.

There was also an exhibition stand where the Institutes displayed their crop varieties, technologies and services offered.