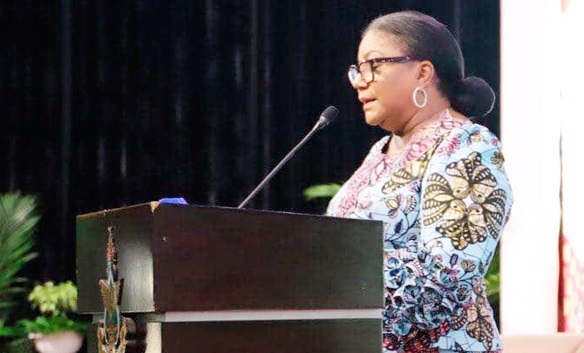 The First Lady, Rebecca Akufo-Addo, has entreated the youth, particularly young women, to make the change they want to see and create a world of equal opportunities for all.

“Imagine the world you want to see and create that world for yourselves and generations after you,” she said, and urged them to “leave your footprints in the sands of time.”

Addressing participants in a panel discussion organised to mark this year's International Women's Day (IWD) yesterday, the First Lady observed that even though a lot had been done in the past to bridge the gap between women and men, “gender disparities still remain. Women's representation is still lagging in politics.”

Mrs Akufo-Addo said the gender equality guaranteed by the 1992 Constitution "does not translate into reality.”

"Women are still paid less than men for the same work. These and other biases still exist with negative impacts on families and communities," she stated.

The panel discussion to commemorate the IWD was held at the Great Hall of the Kwame Nkrumah University of Science and Technology (KNUST) in Kumasi.

This year’s commemoration is on the theme: “Gender equality today for a sustainable tomorrow”, with a campaign hashtag “#BreakTheBias”.

The event is aimed at reflecting on breaking biases and inequalities that prevent women from achieving their full potential.

In Kumasi, the event attracted many dignitaries such as public officers, traditional leaders and students drawn from selected schools across the Greater Kumasi Metropolitan Area in the Ashanti Region.

Among them were the wife of the Vice-President, Samira Bawumia; wife of the Asantehene, Lady Julia Osei Tutu; the Chief of Staff, Mrs Akosua Frema Osei-Opare; the Ashanti Regional Minister, Simon Osei Mensah, and the Vice-Chancellor of KNUST, Professor Rita Akosua Dickson.

Mrs Akufo-Addo emphasised that although conflict affected women and children the most, women were largely absent from the peace table when it came to conflict resolution.

She said studies had shown that there was a 35 per cent greater chance of peace agreements lasting 15 years when women participated, and wondered why women were excluded from peace negotiations.

The First Lady stated that a clarion call for all women to join hands through renewed energy to pursue equality together was timely.

She also called on all to appreciate and respect one another’s views, irrespective of their gender and social class.

The First Lady said holding biased positions was the antithesis of the country’s development.

Mrs Akufo-Addo emphasised that women and young girls all over the years had been denied so many opportunities because of their gender, and that it was time “we say no to biases among all manner of persons.”

“Bias is not normal. It is the antithesis to development. No amount of explanations, apologies or excuses can make you right. Your talent, intelligence, drive, ingenuity and determination qualify you for a place at the table. Your field of endeavour does not matter. What matters is that no one should stop you,” the First Lady stressed.

Time to hand over

Mrs Akufo-Addo said her generation had played its role and it was time for the next generation to take over and continue with the fight, adding that the “equality front” needed new blood, renewed energy, fresher perspective and a new kind of hunger.

"You are now the frontline for advocating for a gender-equal world. We are behind you, supporting with our insights, resources and years of experience in the trenches," the First Lady said.

Mrs Akufo-Addo urged the young leaders to make their voices be an integral of who they were, stressing “How you use it, is vital to your becoming the person you want to be. Use your voice to create the change you want.”

Luckily for the new generation, Mrs Akufo-Addo said they had the benefit of technology where they could access information just by a click of a button.

“You have access to the world, including decision-makers and a network of like-minded global citizens. This is something that was unimaginable decades ago.

“It is time for you to negotiate your way to equality and the removal of biases,” she said.

For her part, the Chief of Staff said successive governments had mainstreamed various interventions towards gender equality.

Mrs Osei-Opare added that education was one of the most important aspects of human development and for eliminating gender disparity at all levels.

She noted that in spite of the gains made in the gender equality front “gender biases persisted in most parts of our country.”

The Chief of Staff said research had shown that women had enormous impact on the well-being of their families and society “but their potential is sometimes not realised because of discriminatory social norms, incentives and legal frameworks.”

She stressed that attaining the rightful place as female gender “does not happen automatically,” and therefore called on all women to join hands with renewed energy to pursue equality together.

The International Women’s Day (IWD) is commemorated globally to celebrate the social, economic, cultural and political achievements of women.

The day also marks a call to action for accelerating gender parity and it is an occasion for groups and institutions to come together to celebrate women's achievements or rally for women's equality.

The day was first celebrated in Austria, Denmark, Germany and Switzerland on March 19, 1911, following the agreement at the Copenhagen conference.

Some global institutions and personalities have released statements to commemorate the day.

The UN Secretary-General, António Guterres, in an article, said as the world moved ahead to mark the day, the clock on women’s rights was moving backwards and stated that “all of us are paying the price.”

He wrote that the cascading crises of recent years had highlighted how women’s leadership was more crucial than ever.

“Women have heroically confronted the COVID-19 pandemic as doctors, nurses and public health and social care workers. But at the same time, women and girls have been the first to lose out on jobs or schooling, taking on more unpaid care work, and facing skyrocketing levels of domestic and cyber abuse and child marriage,” he said.

“Women should be first in line for the 400 million jobs we are called to create by 2030. We need social progress through investments in social protection systems and the care economy,” the UN Secretary-General said.

Such investments, he added, yielded huge dividends, creating green, sustainable jobs, while supporting members of societies that needed assistance, including children, older people and the sick.

“As a matter of justice, equality, morality and plain common sense, we need to turn the clock forward on women’s rights. We need a sustainable, feminist recovery centred around — and driven by — women and girls,” Mr Guterres stated.

The United Nations World Food Programme (WFP) used the day to draw attention to how women and girls, especially in rural communities, continued to face the brunt of the climate crisis that exacerbated pre-existing inequalities, jeopardised their food security and fed instability and migration.

It said the day’s theme recognised the contribution of women and girls around the world who played a crucial role in climate change adaptation and mitigation.

“Such inequalities undermine the ability of women to prepare for, cope with and recover from climate shocks and stresses,” it stated.

As part of efforts to strengthen resilience in climate action, WFP, in collaboration with five regional agricultural directorates (the Upper East, Upper West, Bono East, Northern and Ashanti regions), trained 70 agriculture extension agents and 21,000 smallholder farmers, more than half of whom were women, on climate smart agricultural practices.

In so doing, WFP Ghana contributed to environmental conservation, sustainable farming and promoted the integration of good nutritional practices in agriculture, a statement by the organisation said.

The training was premised on the background that over 50 per cent of the labour force employed in the country’s agricultural sector were women.