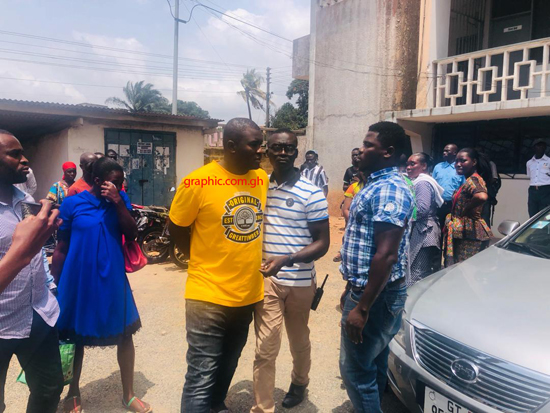 Eric Kojo Duah, aka Sakora, the man accused of killing two police officers at Buduburam in the Central Region on August 28, 2019, has been refused bail by the Accra High Court.

Counsel for Duah, Mr Augustines Obour, made an oral application for bail at the court today(Tuesday) when his client made his first appearance.

He argued that Duah had been in custody for far too long, and that it would be in the interest of justice if he was granted bail.

Counsel said his client had competent sureties to secure his bail, was not a flight risk, but was ever ready to appear in court always to defend himself.

The presiding judge, Justice Elfreda Denkyi, refused the bail application, explaining that she was not inclined to grant bail.

Kojo Duah has been charged with murder for the alleged murder Sgt. Michael Dzamasi, a service driver, and L/Cpl Awal Mohammed at a place called Big Apple at Buduburam.

Another accused person- Michael OSarfo Ani, has been charged with abetment to commit murder.

The two were committed by the Kaneshie District Court to stand trial at the High Court.

The Accra High Court is expected to empanel a seven-member jury for the trial.

Hearing continues on May 20, this year

It is the case of the prosecution that Duah allegedly shot Sgt Dzamesi and L/Corporal Awal, both attached to the Motor Traffic and Transport Department (MTTD) of the Ghana Police Service at Budumburam near Kasoa, who were on task force duties on the Kasoa-Winneba highway.

According to the prosecution, the Duah, in the company of his friends, using an unregistered Toyota Camry vehicle, and driving recklessly, allegedly shot the unarmed policemen after refusing to stop when the security officers signaled them to do so.