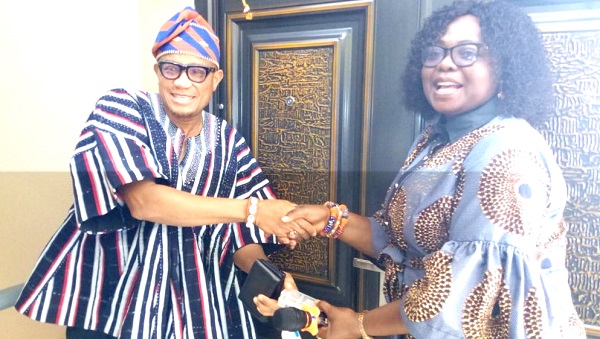 THE Chief Executive Officer (CEO) of the National Petroleum Authority (NPA), Dr Abdul-Hamid Mustapha, has called for the commitment and support of the public towards efforts to fix the economy and ultimately develop the country.

“We have no choice as Ghanaians but to contribute in whatever way we can for the betterment of the country,” he said.

At the unveiling of the refurbished Bono Regional Coordinating Council’s (RCC) conference room in Sunyani, Dr Mustapha appealed to the public, particularly public sector workers, to rededicate themselves to the development of the country.

The conference room was refurbished by the NPA to improve the state of the facility.

For more than 10 years, the conference room of the RCC had not seen any rehabilitation works, as parts of the infrastructure deteriorated.

Indeed, officials had claimed at different fora that the facility was not fit for purpose.

The RCC was thus compelled to hire conference facilities within Sunyani to host its meetings and workshops, including security meetings.

He said successive governments had created the enabling environment and implemented favourable policies and interventions for the improvement of the lives of the citizenry.

He mentioned scholarship packages for students to study in the country and outside the country, loan for university students, the Free Senior High School policy and the Planting for Food and Jobs agricultural programme as some of the commitments made by the government to improve the living standard of the citizens.

Dr Mustapha said politicians alone could not be blamed for the country’s economic challenges, explaining that only few people were occupying political positions.

“How can about a maximum of 600 people be the cause of Ghana’s problems when there are over 30 million people? Everybody is accountable for the country’s economic challenges,” he stated.

He said several public workers had engaged in negative practices such as bribery and corruption, stealing of food items meant for pupils and students, among others.

Dr Mustapha explained that all those illegal practices had contributed to the country’s problems, and called on the public to eschew such negative practices that retarded the development of the country.

“We can change government every eight years, but if we don’t change our attitude and commitment, we will continue to remain in our challenges,” he stated.

The Bono Regional Minister, Justina Owusu-Banahene, said holding conferences in hired facilities had taken heavy financial toll on the RCC, considering the fact that the RCC’s main source of revenue were periodic releases from the central government.

She commended the Board and Management of the NPA for responding to the call of the Bono RCC to support it to refurbish the facility.