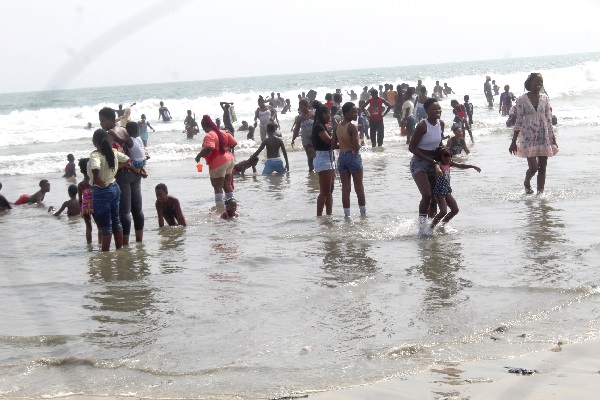 Holidaymakers at some notable local beaches yesterday took to horse riding, all-terrain vehicle riding, barbecue, among others, to while away the Constitution Day ahead of the second working week of the year.

Despite the fun-filled activities, the beaches were moderately populated yesterday as compared to events during the New Year holidays.

Many of the beaches that the Daily Graphic visited had only a handful of patrons, in spite of the lively activities they held.

The Laboma Beach, La Pleasure Beach Resort and Marine Drive Beach, for instance, recorded low patronage as reflected in the sales made by vendors and service providers.

With various recreational activities still in sight to spice up the beach, many tents reserved for holidaymakers were, however, only occupied by the beaches’ own workers.

With their services unpatronised, some horse riders walked around almost idly, while others appeared to press every available holiday maker for patronage.

The General Manager of the La Pleasure Beach Resort, Samuel Kotey Neequaye, told the Daily Graphic that as at 2:30 p.m., the beach had sold only 400 tickets.

He blamed the low patronage on the inadequate awareness of the holiday.

He noted that many of the over 10,000 people that thronged the beach during the New Year holiday were expatriates, and majority of them had left to their various countries, hence the low patronage.

Nonetheless, Mr Neequaye said he was expecting the number to go up slightly by close of day since the beach operated a 24-hour schedule.

Ataa Osa, a horse rider, said since 10:00 a.m., only three people had patronised his service.

A khebab vendor at the La Pleasure Beach Resort, Ali, also confirmed the low patronage, saying “I am hopeful that by close of day, at least, I can sell everything”.

At the Laboma Beach, the patrons were mainly parents with their children.

Mr Alfred Abeka, who spoke to the paper, said the family could not go to the beach during the festive season because of the huge numbers and security reasons.

“Since the numbers are low, we decided to spend some time here as a family before work resumes fully tomorrow,” he added.

The General Manager in charge of Corporate Affairs at the Laboma Beach, Jeffery Tetteh, said: “We are managing, but it is better than previous years because we have seen some significant improvements since the year began, and we are hoping the momentum will be sustained”.

He noted that the beach had lined up a series of activities for late night, adding: “We are expecting more people this evening because of the highly publicised events”.

At the Marine Drive Beach, many revellers had carried along with them packed lunches and drinks.

The revellers were engaged in horse riding, sport activities and swimming.

A number of vendors were also at the beach selling their products.

A team had also been detailed to patrol the beach to safeguard lives and property, and ensure tidiness.

A reveller, who only gave her name as Felicity, explained that the following week was going to be stressful as she would be working, saying the holiday was an opportunity for her to relax.

A vendor, Victoria, said because it was a holiday, she expected the beach to be full during mid-afternoon just like any other holiday.